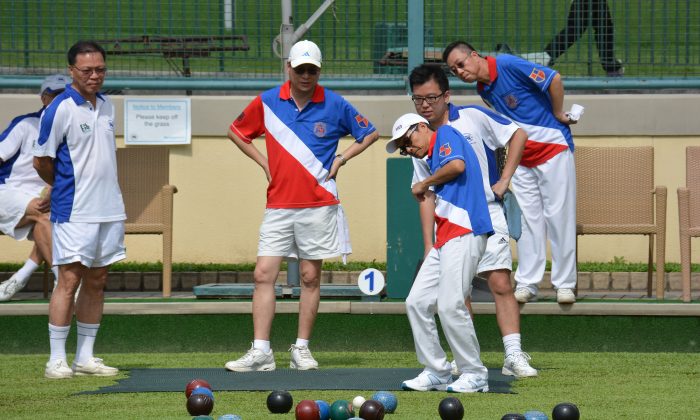 Both the Hong Kong Football Club (in white) and Kowloon Bowling Green Club members get anxious during the Premier League encounter. KBGC emerged with a 6:2 victory. (Stephanie Worth)
International

Equipped with three of the best bowlers in Hong Kong as their new recruits, KCC started the season quite well. They won their first two games against Indian Recreation Club and Hong Kong Football Club, but faced their first set back two weeks ago at the hands of KBGC’s B team—losing 8-0 away from home bit hard.

So the final hopes sat on the shoulders of ex-Hong Kong International Chadwick Chen, who finally emerged victorious by beating YS Leung 16:8. And this eight-point margin also proved decisive in securing KCC a draw in the overall score 4-4.

Meanwhile, the KBGC A team (2011 champion) took on Hong Kong Football Club at Sports Road. Despite Heron Lau losing heavily to Neil Herrington (26:6), wins by Macau International James Cheng and China International Terence Lee were enough to cover the loss. The 6:2 win took the team to 24 points, four points ahead of the second-placed Police team. KCC is further behind with 18 points.

While a number of games were postponed due to the poor weather over the weekend, the table will change dramatically once all teams have played their games.

The table does not show the full picture of the women’s league status as the postponement of a few games has distorted the picture a bit. Currently Shatin Sports Association is leading the table by six points, but they have played one more game than the second-placed Hong Kong Football Club, who is looking for their seventh consecutive title.

Currently occupying the bottom spot is Club de Recreio, who has former HKFC top bowler and Hong Kong international Tammy Tham on the team sheet. The team only has five points after three games.