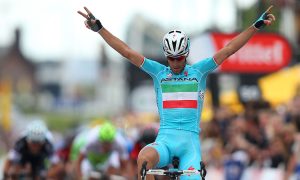 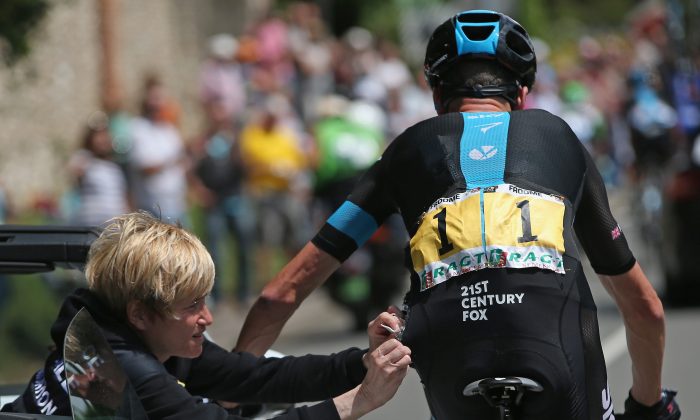 Chris Froome of Team Sky receives medical attention after being involved in a crash early in the race during Stage Four of the Tour de France. Froome crashed twice in Stage Five and was forced to abandon. (Doug Pensinger/Getty Images)
Cycling

2013 Tour de France winner Chris Froome of Team Sky crashed twice in the first half of Stage Five of the 101st Tour de France, after crashing hard in Stage Four, and has abandoned the race, possibly with an injured right shoulder.

Froome first crashed 35 km into the 155-km stage as he skidded on wet pavement trying to avoid hay bales marking a traffic sign. He was able to remount and rejoin, but crashed hard on his right side just before entering the first cobblestone section, about 50 km further into stage.

The Sky team leader had already crashed hard on his left side in the opening kilometers of Stage Four, possibly aggravating almost-healed injuries sustained in a crash in the Critérium du Dauphiné in early June. he crashed on his left side first, but apparently was not injured. His second crash was much harder; he seemed to be nursing a shoulder injury as he slowly made his way to the team car.

Stage Five was anticipated with dread by most riders as it contained nine sections of  pavés, the rough, slippery cobblestones still used to pave some roads in rural France and Belgium. Riding pavés is a bone-jarringly painful experience at the best of times; hard rain made the roads so much worse that race organizers had to reroute around two cobbled sections where the mud and water were too deep.

Ironically, Chris Froome crashed before reaching the cobbled sections. He was one of over a dozen riders which crashed on roads made extremely slick by hard rain.

Movistar’s Alejandro Valverde and BMC’s Tejay Van Garderen, also race favorites, both crashed after the first cobbled section, but managed to rejoin the leader’s peloton, which has shrunk to about three dozen riders including Vincenzo Nibali of Astana and Alberto Contador of Tinkoff Saxo, the top contenders.