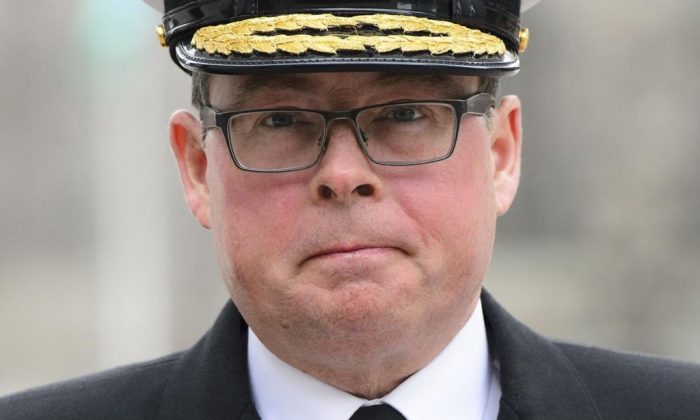 OTTAWA—Defence Minister Harjit Sajjan is remaining mum on details of the government’s settlement with Vice-Admiral Mark Norman, citing confidentiality provisions in the deal.

Norman and the government announced on Wednesday that the military’s former second-in-command is retiring after negotiating what they described as a “mutually acceptable agreement.”

The deal, negotiated over the past two weeks, followed Crown prosecutors dropping their case last month against Norman, who had been charged with breach of trust for allegedly leaking government secrets about a shipbuilding deal.

But details of the deal, including the amount and whether there are any provisions forbidding Norman from talking publicly about the politically charged case, remain shrouded in mystery.

In an interview from Brussels where he was attending a NATO meeting, Sajjan declined Thursday to fill in any of the blanks in what he described as “good-faith” talks between Norman and the government.

“Unfortunately, because of confidentiality, I can’t provide those details out of respect for the discussions we had there,” he said.

“We can’t discuss the details because of the good-faith agreement that was made.”

The Opposition Conservatives have accused the Liberals of trying to buy Norman’s silence ahead of the fall federal election given the grief the case had caused the government.

Sajjan did not say why the details of the settlement are covered by confidentiality nor would he comment on Norman’s retirement after the vice-admiral had indicated he wanted to return to service.

“This is decision based on him and the discussions that he has with his family and we have to respect that,” Sajjan said.

“But one thing I can assure you, from the time we were able to re-engage, this was done in good faith to come to this point that’s comfortable for Vice-Admiral Norman as well.”

Norman was suspended from the military in January 2017 and later charged with breach of trust for allegedly leaking government secrets to put pressure on the government to approve a $700-million shipbuilding project.

The former navy commander, who was vice-chief of the defence staff when he was suspended, denied any wrongdoing and his lawyers accused the government of political interference in the case.

Following months of pre-trial hearings in which Norman’s lawyers fought for access to thousands of pages of secret government documents, including some from Prime Minister Justin Trudeau, the Crown stayed the case on May 8.

Prosecutors said at the time that new information uncovered by Norman’s legal team had left no reasonable prospect of a conviction. Norman said then that he wanted to return to duty, a plan that was welcomed by defence chief Gen. Jonathan Vance.

Instead, Norman and the government said in that joint statement the Department of National Defence released Wednesday that “after consulting with his family, his chain of command, and his counsel, Vice-Admiral Norman has decided to retire from the Canadian Armed Forces.”

A date has not been set for his retirement.