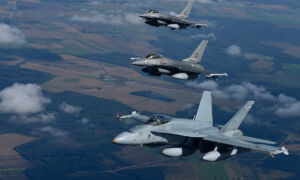 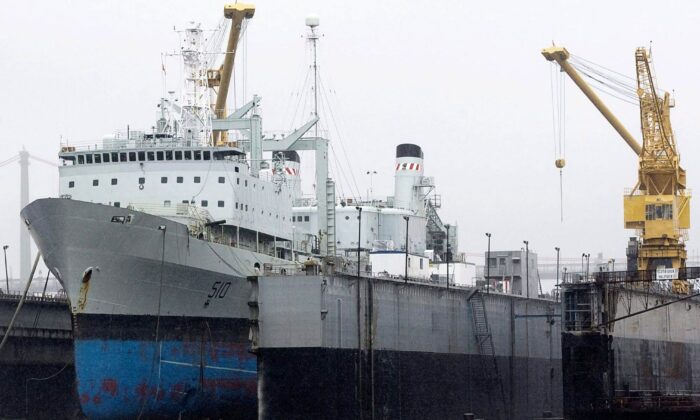 The navy supply ship HMCS Preserver sits at dry dock while undergoing refit in Halifax on July 14, 2010. The Royal Canadian Navy has been without a full-time support ship since 2014 as a plan to build two new ones continues to be plagued by delays and budget increases. (The Canadian Press/Andrew Vaughan)
Canada

The Department of National Defence is denying it misjudged the cost to build two new naval support ships even though the price tag for the project increased $1.5 billion in less than two years—and admits it could rise even more.

The Liberal government announced last month that the cost of the project to buy two Joint Support Ships (JSS) needed for the Royal Canadian Navy had increased to $4.1 billion—up from initial estimates of $2.6 billion.

The new figure echoes numbers from Parliament’s budget watchdog, who warned in a 2013 analysis that the project would require $4.13 billion.

However, the defence department told the Ottawa Citizen on July 2 that there has been no misjudging of costs on the JSS project on their part, and said the project’s cost was   “based on the data and figures available at the time.”

The department also admitted the costs could go up even further in the coming years.

“As a result, it’s possible that cost estimates may change for a variety of reasons that can’t be controlled or predicted.”

On June 15, Ottawa announced they had officially awarded a contract for the full construction of the two new Protecteur-class Joint Support Ships to Vancouver’s Seaspan shipyards, which has already started work on the first of the vessels.

Seaspan was first tapped to build the two ships and several coast guard vessels in 2011, at which point the supply ships were expected to cost $2.6 billion. The figure was later revised to $3.4 billion before another $700 million was added in June.

The first of the support ships was to have been delivered by 2019. The government says it now doesn’t expect the first ship before 2023, with the second due in 2025. Seaspan has been under contract to work on some parts of the first ship since June 2018.

The Royal Canadian Navy has been without a full-time support ship since 2014 and is currently relying on a converted civilian vessel that is being leased from Quebec’s Chantier Davie shipyard to fill the gap.

That ship, the MV Asterix, was at the heart of the failed prosecution of Vice-Admiral Mark Norman, now retired. Charges against Norman were stayed, in a case his lawyers argued was politically motivated.

The Liberal government played down the cost increase to the support ships last month, with senior ministers touting the importance of the vessels to the Royal Canadian Navy and the jobs that the project is creating in Vancouver and elsewhere.

“These new ships will provide a necessary capability for our Royal Canadian Navy, while providing significant economic benefits and jobs to Canadians, including thousands of jobs created or sustained,” Defence Minister Harjit Sajjan said in a statement.

Yet the cost increase was the latest to hit the shipbuilding plan plagued by delays and budget increases for years. The plan is intended to recapitalize the majority of Canada’s naval and coast guard fleets.

The entire plan to buy new warships to replace the navy’s frigates and destroyers, several Arctic patrol vessels, a polar icebreaker, and four science vessels for the Canadian Coast Guard in addition to the two support ships was pegged in 2011 at $35 billion.

The warships alone are now expected to cost at least $65 billion while the rest of the projects have either seen similar budget increases or their budgets are under review. The delivery schedules for the projects have also been pushed back numerous times.

The Conservative government at the time refuted the Parliamentary Budget Officer’s estimate, with then-public works minister Rona Ambrose saying appropriate safeguards had been put into place to protect taxpayers.

Ottawa has in recent years produced updated cost estimates for most of the vessels being built through the federal shipbuilding plan. However, budgets for the polar icebreaker and an offshore science vessel for the coast guard are still under review.