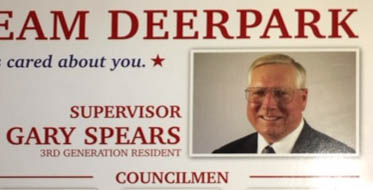 Campaign flyer for Gary Spears, the incumbent Republican supervisor of the Town of Deerpark.
New York

Ten residents at 140 Galley Hill Road in Cuddebackville have opened a lawsuit against Deerpark Supervisor Gary Spears after he challenged their ability to vote in August.

The plaintiff’s filed charges in federal district court on Oct. 20.

“We are making allegations that the supervisor, as supervisor, violated the Voting Rights Act, the First and Fourteenth Amendment that engaged in group defamation,” said Michael Sussman, the attorney representing the group.

Spears filed the challenge when he saw that 30 voters with Asian-sounding names registered to vote at 140 Galley Hill Road, which tax records show is a three-bedroom house. It is also the address of Fei Tian College, a bilingual Chinese-English performing arts school, and its dormitory, and the home of Dragon Springs, a community of practitioners of Falun Gong, a spiritual practice.

In his charge, Spears questioned whether that address was their primary address and whether they were U.S. citizens. After an initially faulty investigation, all 30 were cleared to vote.

Sussman said Spears made the challenge on “no basis whatsoever” since, as supervisor, he should have known that address belonged to a college and its dormitory.

“He just simply tried to draw suspicion upon a group of people for no reason other than their ethnicity and his belief about their political association,” he said.

Spears, the chair of the Republican Party for Deerpark, is currently running against a democratic opponent and all thirty challenged voters registered as democrats.

The New York State Attorney General’s office has an ongoing investigation into whether this was a case of voter discrimination and intimidation.

Spears did not respond to a request for comment.