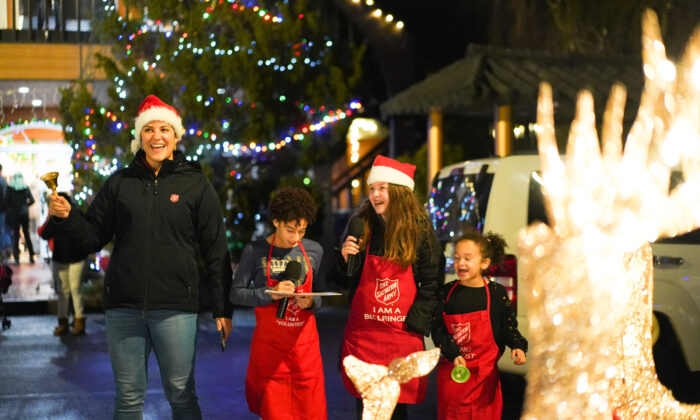 Residents from the tri-state area enjoyed a festive holiday market with music, lights, and food in the town of Deerpark in western New York on Dec. 3.

The market attracted about 2,000 residents, according to the host organization, New Century.

Jin Pang, the event organizer at New Century, told The Epoch Times: “It is a wonderful time of the year for sharing and giving. We invite the community to come and celebrate Christmas together.”

Betty Kalin, a resident of nearby Port Jervis, said she loved the holiday decorations and that everyone at the market was friendly.

The market featured a walk-through Christmas light show with various holiday displays, including deer, angels, and gifts, with a tall Christmas tree in the center, which was lit up that evening by Town of Deerpark Chief Richard Sztyndor.

At the market, residents lined up to get pictures taken with a man dressed up in a Santa Claus outfit.

Milford, Pennsylvania, resident John Bensley said: “With the economy as it is, it has been hard on everyone. What I like best about the market is that it offers us a holiday celebration without charging us for parking and taking a picture with Santa.”

The market offers a mix of Western and Eastern food.

“I can feel a good sense of energy. It is so calming, kind of like meditation,” Michael said.

About 50 vendors attended the market, offering products including crafts, jewelry, and wine and services such as charity opportunities.

Eva Martin of Sullivan County had a booth selling handmade crafts by herself. She said she hoped her crafts could bring joy to other people, just as they did to her.

In 2008, Martin was diagnosed with stage-four blood cancer and soon underwent radiation and chemotherapy. To cope with the pain from the aggressive treatment, she made bracelets of gemstones and then moved on to all kinds of crafts, including holiday decorations.

The Christmas Market will be open again at New Century on Dec. 10.