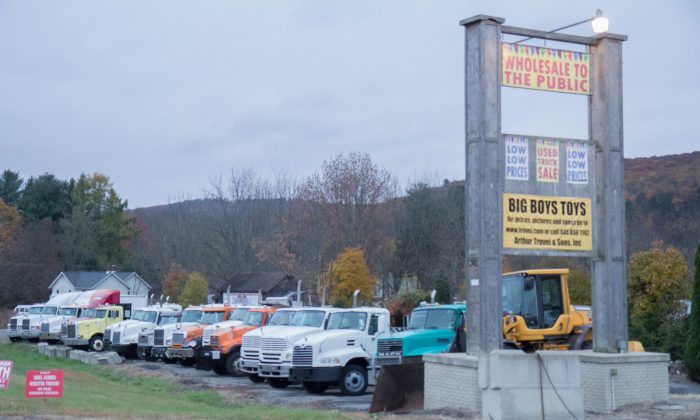 Deerpark Board Approved Truck Purchase From Board Member’s Dealership

DEERPARK—The Town of Deerpark Board approved the purchase of a 2002 GMC bucket truck for $35,900 from the dealership Arthur Trovei & Sons, Inc. this February, the dealership of a sitting Board member since 2014.

Trovei was absent from the meeting where the purchase was approved, but he was at the meeting to approve the minutes, which he abstained from voting on.

According to the minutes of the Feb. 9 meeting, Highway Superintendent Ed Hughson made no mention of Trovei’s connection to the deal. The minutes say that he merely “discussed the opening of bids for the bucket truck. He recommended accepting the bid of $35,900.00,” and shortly thereafter board members David Dean, Ken Smith, and Supervisor Gary Spears approved it.

Hughson said in a phone interview he believed the Board members were aware that the truck came from a Board member’s company, although he could not remember if he stated it at the meeting.

This is possibly a violation of the Town’s disclosure of interest policy.

This is possibly a violation of the Town’s disclosure of interest policy.

In summary, the policy says that any member of the board or municipal agency, or anyone else having knowledge of a potential conflict of interest, needs to alert the “representative chairmen of such bodies.” The “nature and extent of any financial or other private interest” should be recorded in the minutes, the code says.

In an email, Deerpark Board member Ken Smith, who is also Trovei’s brother-in-law, did not deny or confirm knowledge of the origin of the truck, but defended the procurement  policies the Board used, saying “Deerpark has procurement policies written in stone. They were followed to the letter.”

There was one advertisement placed in the Times Herald-Record on Jan. 9 advertising the bids.

Smith said the truck that was purchased was the lowest of three or four bids. Epoch Times obtained the bids and there was only one. It was signed “Arthur Trovei Pres.”

Spears, Dean, and Trovie did not respond to repeated requests for comment.

This article was updated to include Smith’s relationship to Trovei and the number of bids that were received for it.