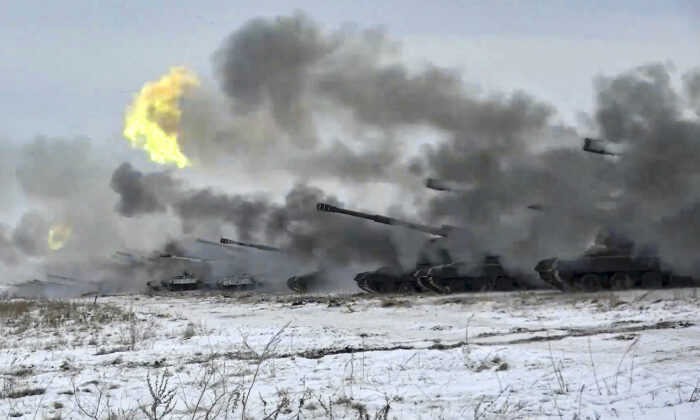 ‘Deeply Concerning,’ Says US After UK Alleges That Russia Plans to Install Pro-Kremlin Leader in Ukraine

The White House has called a UK government assessment that Russia is seeking to replace Ukraine’s government with a pro-Russian administration “deeply concerning,” and said that it stands with the duly elected Ukrainian government.

“This kind of plotting is deeply concerning,” said U.S. National Security Council spokeswoman Emily Horne. “The Ukrainian people have the sovereign right to determine their own future, and we stand with our democratically-elected partners in Ukraine.”

UK Foreign Secretary Liz Truss said in a statement in the early hours of Sunday: “We have information that indicates the Russian Government is looking to install a pro-Russian leader in Kyiv as it considers whether to invade and occupy Ukraine.

“The former Ukrainian MP Yevhen Murayev is being considered as a potential candidate.”

Murayev is head of the small pro-Russian party Nashi, which currently holds no seats in Ukraine’s parliament.

The British foreign ministry did not provide evidence to explain its assessment.

The office also named four Ukrainian politicians it said has links with the Russian intelligence services. They include Serhiy Arbuzov, Andriy Kluyev, Vladimir Sivkovich, and Mykola Azarov, who all formerly served in Ukraine’s leadership.

“Some of these have contact with Russian intelligence officers currently involved in the planning for an attack on Ukraine,” the UK government alleged of the individuals.

“The information being released today shines a light on the extent of Russian activity designed to subvert Ukraine, and is an insight into Kremlin thinking,” Truss said in a statement. “Russia must de-escalate, end its campaigns of aggression and disinformation, and pursue a path of diplomacy. As the UK and our partners have said repeatedly, any Russian military incursion into Ukraine would be a massive strategic mistake with severe costs.”

The UK government said it “unequivocally support[s] [Ukraine’s] sovereignty and territorial integrity within its internationally recognised borders, including Crimea.”

Top U.S. and Russian diplomats on Jan. 21 failed to make a major breakthrough in talks to resolve the crisis over Ukraine, but they agreed to continue talks.

Russia has sent an estimated 100,000 troops with tanks and other heavy weapons to its borders with Ukraine’s northeast—leading to fears of an invasion—but denies it is planning an attack.

The amassing of troops and weapons is believed by the West to be preparation for a war to prevent Ukraine from joining the NATO Western security alliance.

Russia recently demanded written guarantees that NATO will give up any military activity in Central and Eastern Europe, as well as promise that Ukraine will never be added as a member, but member countries have refused to make such promises.

The United Kingdom recently sent 2,000 anti-tank missile launchers in the airlifts to Ukraine, alongside 30 elite troops to provide training, in efforts to support the government in Kyiv against a potential Russian attack.

Several other NATO members have also signaled support for Ukraine’s defense in various initiatives, from providing weaponry and troops, to training and offering loans.