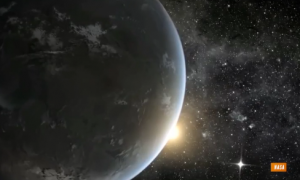 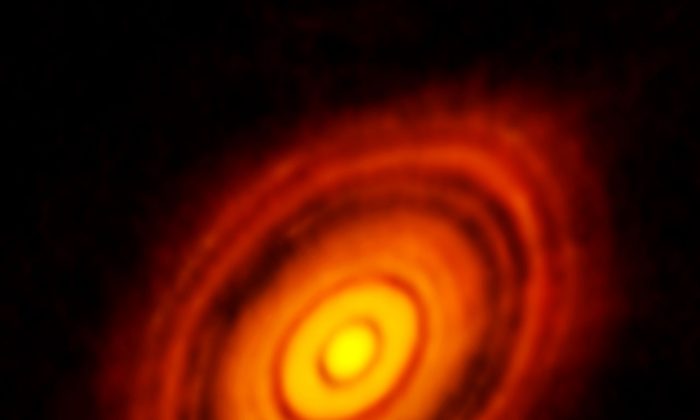 This image sparked scientific debate when it was released last year, with researchers arguing over whether newly forming planets were responsible for gaps in the dust and gas swirling around the young star. Now astrophysicists say they have proof. (ALMA [ESO/NAOJ/NRAO])
Science

By University of Toronto
biggersmaller
Print

Astrophysicists have confirmed that a recent and famous image from deep space marks the first time we’ve seen a forming planetary system.

The team says circular gaps in a disk of dust and gas swirling around the young star HL Tau are in fact made by forming planets.

“HL Tau likely represents the first image taken of the initial locations of planets during their formation,” says Daniel Tamayo from the Centre for Planetary Science at the University of Toronto Scarborough and the Canadian Institute for Theoretical Astrophysics. “This could be an enormous step forward in our ability to understand how planets form.”

The image of HL Tau, taken in October 2014 by the Atacama Large Millimeter/submillimeter Array (ALMA) located in Chile’s Atacama Desert, sparked a flurry of scientific debate.

While those who observed the original image claimed that planets were most likely responsible for carving the gaps, some remained skeptical. It had been suggested that the gaps, especially the outer three, could not represent forming planets because they are so close together.

It was argued that planets massive enough to carve such gaps should be scattered violently by the force of gravity and ejected from the system early on in its development.

But the new study, available online and scheduled for publication in the Astrophysical Journal, is the first to suggest the gaps are evidence of planetary formation because they are separated by amounts consistent with what’s called a special “resonant configuration.”

In other words, these planets avoid violent collisions with each other by having specific orbital periods where they miss each other, similar to how Pluto has avoided Neptune for billions of years despite the two orbits crossing one another.

“The system can be much more stable in a resonant configuration and it’s a natural state for planets in the HL Tau system to migrate to,” Tamayo says.

The HL Tau system is less than a million years old, about 17.9 billion kilometers in radius and resides 450 light years from Earth in the constellation Taurus.

Since young systems like HL Tau are shrouded by a thick cloud of gas and dust, they can’t be observed using visible light. ALMA resolves that issue by using a series—or an “array”—of telescopes located 15 kilometers apart that use much longer wavelengths.

The result is unprecedented access to high resolution images that will continue to revolutionize the study of planetary formation, Tamayo says.

“We’ve discovered thousands of planets around other stars and a big surprise is that many of the orbits are much more elliptical than those found in our solar system.  This and future ALMA discoveries may be the key to connecting these discovered planets to their original birth locations.”

While the HL Tau system remains stable in its relatively young age, Tamayo says over billions of years it will act as a “ticking time bomb.” Eventually the planets will scatter, ejecting some and leaving the remaining bodies on elliptical orbits like the ones found around older stars.

Our solar system does not seem to have undergone such a dramatic scattering event, Tamayo said. Future observations could also go a long way in determining whether our solar system is typical or an oddity ideally suited for life.

“If further observations show these to be the typical starting conditions around other stars, it would reveal our solar system to be a remarkably special place.”