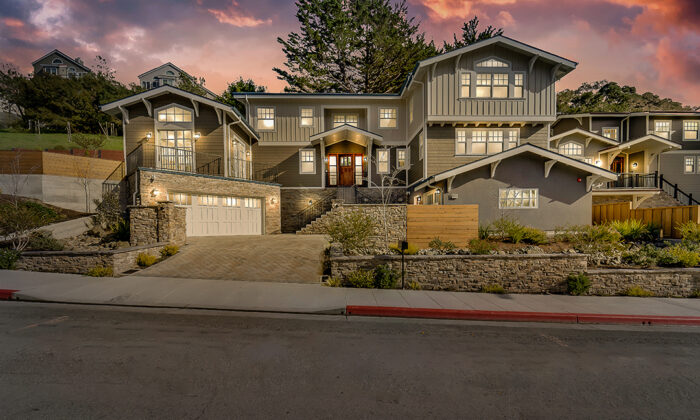 While inflation runs rampant and mortgage rates continue to inch upward, many luxury home buyers are apparently unaffected as home prices are still escalating through the roof in affluent communities across the United States.

April stats from the National Association of Realtors (NAR) indicate over 20 percent of homes priced at $1 million or above can be found in the West, while 6.7 percent of all sales over $1 million were located in the Northeast. Just over 4.5 percent of $1 million-plus home sales were in the South, and a mere 1.7 percent in the Midwest.

So where are these buyers coming from and will their deep pockets ever run out of cash?

A look at the May luxury listings in Santa Clara County showed an astounding average home price of $6.59 million in Los Altos Hills and a median price of $5.7 million. A close second was Los Altos with a $4.86 million average and $4.57 median sales price. Of the 18 communities listed, there were no homes listed under $1 million, and the lowest priced area was Gilroy, with an average listing price of $1.25 million and a median of $1.21 million.

Sandy Jamison, broker and owner of Tuscana Properties and The Jamison Team in San Jose, Calilfornia, said finding a move-in-ready single-family home under $1 million in their region is becoming very rare.

“A lot of people come in and tell me their budget is up to $1 million and I tell them I don’t think they’ll be happy with what we find,” she told The Epoch Times.

Jamison recently sold a three-bedroom, two-bath $960,000 single-family home in San Jose and the clients intend to knock it down and rebuild on the 10,000 square-foot lot. “I was literally attacked by fleas when I went into the house,” she recalled.

Many of her clients are prepared to spend several million dollars to purchase the home of their dreams. Her highest-priced listing to date is an $8 million luxury home and winery with 21 acres in Livermore, California. “This is the Silicon Valley, so most of our buyers are from the technology business or they are business owners, or high-level executives,” she noted.

Some are still paying cash, but a large majority are financing their homes, with typical down payments of 50 percent. “We did have a lot of cash buyers from China, but now it’s mainly local people who have sold homes and want to upgrade,” she said.

Typically, these luxury market homes offer pools, Jacuzzis, top-of-the-line appliances, media rooms, extra acreage, and other amenities.  While she has seen a slowdown in buyer calls and leads as a result of rising interest rates, there’s still no shortage of consumers who want luxury homes. “If they buy now, it will still be less expensive than five years from now,” she reasoned.

On the sellers’ side, a lot of “empty nesters” are putting their homes on the market and moving out of the state to be near family or to downsize. “If a property is in excellent condition and priced right, it will sell. There’s still not enough homes to go around,” she added.

While her seller appointments have doubled, Jamison said there are still some bidding wars, but now there are fewer bidders and properties tend to be on the market a bit longer—two to three weeks instead of just days.

John Oliveira is a real estate broker with Douglas Elliman Real Estate with listings in both Scarsdale, New York, and Greenwich, Connecticut—two of the most affluent areas in the New York metro suburbs. The current median listing for a single-family home in Scarsdale is $1.66 million, and the average is $1.885 million. For Greenwich, the median sales price is coming in at $2.45 million, while the average is hovering at $2.935 million.

Oliveira, who has been in the residential real estate business for 17 years, told The Epoch Times these are the highest prices he’s ever seen. “I think it has a lot to do with how the pandemic shifted what people are looking for in a home,” he explained. “In pre-COVID times, there was actually a lag in the luxury market with a lot of inventory and few buyers. Now, that situation has completely flipped, which is driving the prices higher and higher.”

Today’s luxury buyers—many of whom are working at home several days a week—are seeking more space, more property, and more amenities. Many of the homes in the $1.5 million to $2 million range offer four bedrooms, two or three bathrooms, at least an acre of land, close to 3,000 square feet, and sometimes a pool.

For those “amenity-packed” properties that offer additional comforts such as home gyms, media rooms, indoor pools, and pool houses, the listing prices can surge to the $4 million–$5 million range.

Oliveira also deals with a large number of cash buyers.

“Greenwich, in particular, is a big draw to people from New York City, as well as internationally,” he said. Many of his buyers are from Europe and are looking for a spacious home that’s still a good commute to the city. “It’s not uncommon for these families to make their second, third, or even fourth home in Greenwich.”

Most of his buyers work in the finance industry, and those with younger children are always focused on the high-ranking school districts in the region.

Part of the reason why the luxury market in the New York metro area is still commanding bidding wars is the fact that rising interest rates are discouraging some people from putting their properties on the market.

“Most people who have owned a home for the past few years are looking at interest rates of four percent or lower and that’s keeping them from making a move, since they’re now facing rates well over five percent,” he said.

The lagging state of new construction in the Northeast has also contributed to the problem of low inventory, Oliveira noted.

“It’s unreal how much money is floating around out there, but I do think we’ll start to see a balance in the market, which could bring all home prices a bit more back to normal.”