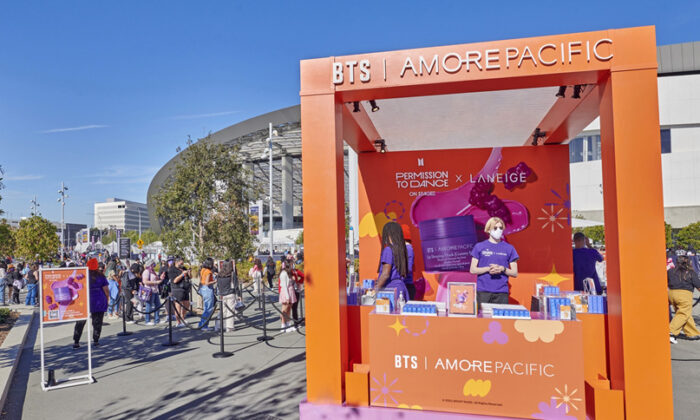 To reduce their dependence on China, Korean beauty companies are accelerating their entry into the U.S. market where favorability for Korean products is increasing. The photo shows AmorePacific as a sponsor promoting cosmetics during the concert of the boy band BTS at SoFi Stadium in Los Angeles from November 27 to 28, 2021. (Courtesy of AmorePacific)
Companies

Korean firms have begun expediting their expansion into North America to reduce their dependence on Chinese customers due to difficulties sustaining product sales in China under the Chinese Communist Party’s (CCP) zero-COVID policy.

Korea’s success in the United States, where their beauty products are rapidly gaining popularity, has been facilitated in part by the Korean boy band BTS and the hugely popular Netflix series “Squid Game.”

Korea’s largest beauty company, AmorePacific, reported that its first-quarter sales increased by 60 percent compared to the same period last year. The company attributes this growth to its U.S. expansion, with top-selling brands like Sulwhasoo for the luxury market, Laneige for the mid-range market, and Innisfree for the low-cost market.

Since this year, the company has focused on developing online and offline sales channels in the United States.

Both Laneige and Sulwhasoo expanded their online sales via listings on Amazon, the largest e-commerce company in the U.S., this past March and April respectively. As for in-store sales, Sulwhasoo entered 51 stores of beauty retailer Sephora in March, and Innisfree expanded its presence to more than 490 retailers, including Sephora and Kohl’s.

Korea’s second-largest beauty company, LG Household & Health Care, facilitated its expansion into the United States. via the acquisition of local retailers. In April, the company acquired a 65 percent stake in The Creme Shop for $120 million. This acquisition gives LG Household a strong position in products targeting America’s young adult market.

Prior to the CCP’s zero-COVID policy, Korean beauty companies largely depended on product sales in China. Roughly 70 percent of AmorePacific’s overseas sales and 50 percent of LG Household & Health Care overseas sales were in the Chinese market.

AmorePacific led the Korean cosmetics boom in China starting in 2016. After that, the company achieved operating profits of approximately $780 million for the first time since its founding.

China’s zero-COVID policy is not the only reason Korean beauty companies are focused on expanding into the United States. Starting in 2017, Korean product sales in China began to drop due to a boycott imposed on the country by the CCP in retaliation for South Korea’s installation of the THAAD (Terminal High Altitude Area Defense) system on a U.S. military base.

Due to the CCP’s actions, AmorePacific said its first-quarter sales in China for 2022 dropped 10 percent year-on-year. As a result, in comparison to the previous year, the company’s total overseas sales dropped 6.1 percent, while operating profits dropped 19.5 percent.

Earlier this year, AmorePacific announced it would be closing half of its 280 stores in China, Korean media Chosun reported. Beauty firms ETUDE HOUSE, Hera, and IOPE are also restructuring and plan to withdraw from in-store sales in China.

In a conversation on June 16 with Reuters, Nicholas Burns, the U.S. Ambassador to China, said he expects Beijing’s zero-COVID policy to persist into 2023.

By rapidly expanding into North American markets, Korea’s beauty companies are hoping to recover from their deep losses in China.