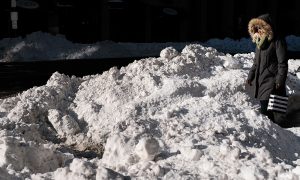 BISMARCK, N.D.—An arctic wave has wrapped parts of the Midwest in numbing cold, sending temperatures plunging and prompting officials to close schools in several states on Friday, but forecasters say the worst may be yet to come.

Cold weather advisories were in effect from North Dakota to Ohio, with dangerously cold wind chills that could dip to as low as 45 below zero (negative 42 Celsius) in northern Wisconsin and Minnesota and to 35 below (negative 37 Celsius) in parts of northern Illinois and Iowa.

The wind chill, which describes the effect of wind and cold temperatures on exposed skin, is of more concern because frostbite can occur within minutes. Schools also closed because of the cold in western Michigan, northern Illinois, eastern Iowa and other parts of Wisconsin.

Ice fishing guide Bryan Lang acknowledged that extreme cold was part of his job in northern North Dakota, but he said he felt lucky to have taken Friday off work: the morning temperature was negative 21 degrees (negative 29 Celsius) with a wind chill of minus 42 (negative 41 Celsius).

“I’m glad to be in the house drinking coffee,” he laughed.

The deep freeze caused organizers of the Winter Carnival in Minnesota to cancel several events, including Thursday night’s parade through downtown St. Paul. In South Dakota, the city of Sioux Falls has closed its six outdoor skating rinks because of the cold weather.

Even harsher weather is expected next week. Bitter cold as bad—if not worse—than the 2014 polar vortex outbreak is expected, as frigid air escapes the Arctic in two icy excursions into Canada and the continental U.S., according to Ryan Maue, a meteorologist for weathermodels.com.

The first bout of cold air will strike northern Michigan and bring extreme cold to Ontario, while the second will spin south over the Midwest and through the Great Lakes, Maue said.

“It’s going to be some insult after injury,” Maue said. “Any hope in sight for a warm-up? No.”

Some forecasters are calling the frigid invasions of cold air “Barney” because computer forecast models show them as chubby purple blobs, Maue said.

In northern Michigan, the U.S. Coast Guard warned residents of islands in the river connecting Lake Superior and Lake Huron that they could be cut off from ferry service during next week’s deep freeze. The guard urged residents to stock up on supplies including food and heating fuel. Ice-breaking operations were working to keep ferry routes open.

In Minnesota, Kenny Blumenfeld, a senior climatologist with the Department of Natural Resources’ State Climatology Office, said winter cold snaps on average are an annual occurrence in Minnesota, but extreme cold happens once every three to five years.

“It’s Minnesota. We’re supposed to go below zero and spend a lot of time not coming above zero. It’s part of our winter,” Blumenfeld said.

The University of Maine’s Climate Reanalyzer notes that the temporary icy cold doesn’t disprove global warming, despite what some non-scientists may claim. On Friday, the globe as a whole was 1.08 degrees (0.6 degrees Celsius) warmer than the 1979 to 2000 average.

“In a warming world you’re still going to have unusually hot and unusually cold events happening in a particular part of the world,” Berkeley Earth climate scientist Zeke Hausfather said. “Weather is not going away.”