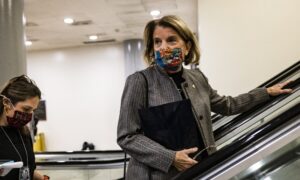 Half of the United States announced that they would end federal pandemic unemployment benefits soon. These governors are concerned that jobless benefits are keeping millions of American workers from getting back to work. This comes as a Fed report, released Wednesday, found that despite companies increasing salaries, there’s still a shortage of workers.

The Senate filibuster is currently the only thing stopping Democrats from dramatically and unilaterally reshaping the nation’s laws. Is it set to change? Arizona’s Democratic Senator Kyrsten Sinema says the filibuster “protects the democracy of our nation” and supports keeping it. With Democrats controlling both parts of Congress and the White House, the filibuster is the only tool Republicans have to influence or block legislation. And it’s the only thing stopping Democrats from passing their entire agenda without any Republican votes. The filibuster requires 60 votes to end debate in the Senate, so at least 10 Republican senators have to join with all of the Democrats to pass most bills.

Taxpayers are set to foot the bill for a $2.5 million contract for lawyers representing New York Governor Andrew Cuomo’s office for the ongoing federal investigations over the way they handled virus data in nursing homes.