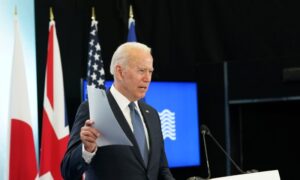 President Joe Biden is meeting with Afghanistan’s president this week, as U.S. forces leave the country. Afghanistan’s former president, Hamid Karzai, said he thinks the country will be better off without the U.S. and NATO’s military presence. While the Afghan side is friendly, it’s not so with Iran. Iran’s president-elect turns down a Biden meeting, demanding the United States lift sanctions.

On the topic of guns, Colorado and Texas are taking two different approaches. Both states signed a slew of bills into law. Colorado aims for gun control. One law allows cities to set their own gun regulations. The National Rifle Association, meanwhile, says this will create a confusing patchwork of laws that are difficult to follow. And Texas becomes a Second Amendment sanctuary state. Texas Governor Greg Abbott said that while people say their Second Amendment rights are being infringed upon, “Texas will not let that happen.”

As for the issue of healthcare, the Supreme Court has rejected some Republican states’ legal challenge to Obamacare. They say it didn’t meet a procedural standard. Biden called it a win for Americans. But not everyone agrees. Sen. John Barrasso (R-Wyo.) said in a statement, “The failed Obamacare system will stagger on as a result of this decision.” He added, “Every American’s health care has been harmed by Obamacare.”