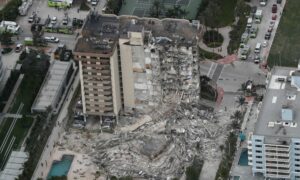 A week after the condo collapse in Florida, search and rescue efforts temporarily ceased over concerns that the parts still standing could collapse. It comes the same day President Joe Biden and the first lady are there to offer condolences to the families of those killed and missing.

Former President Donald Trump paid a visit to the southern border on Wednesday. He called for a border wall and said, “So you could have completed the wall in a couple of months, and they decided not to. Now I hear rumors that they want to do it. But it’s only common sense.” He issued a blistering statement afterward, saying the border “has never been worse.” Customs and Border Protection announced that in May, they encountered over 180,000 illegal border crossers—the highest in two decades.

Twenty Republican governors sent a letter to Biden Tuesday, urging him not to add to the number of justices on the Supreme Court. And in New York, the Trump Organization CFO appeared in a Manhattan courtroom Thursday afternoon in response to criminal charges alleging tax crimes. And the New York State Assembly will soon issue subpoenas as part of its impeachment investigation into Governor Andrew Cuomo.