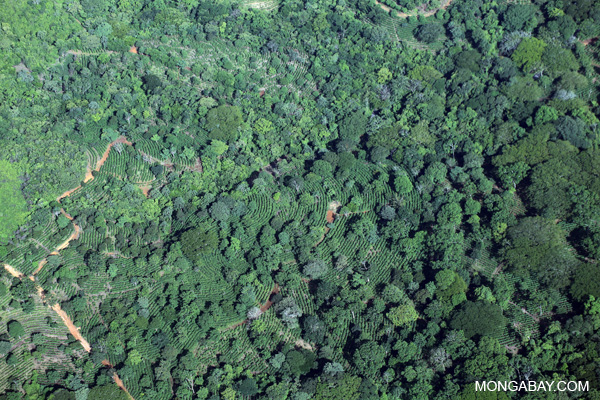 Nika Levikov
View profile
Follow
biggersmaller
Print
Shade-grown coffee is regarded as a form of permaculture, in which coffee is grown under a canopy of native trees in full to moderate shade cover. This allows native vegetation to persist, thereby reducing the impact of agriculture on the natural landscape. While production of shade-grown coffee surged in recent decades, it is now experiencing a decline. A recent study, published in Bioscience, analyzed the situation, finding that the growth of consumer demand and changes in coffee agronomy has caused coffee production and management to change drastically.

Coffee is grown in tropical locations around the world, with Vietnam currently one of the top producers. Between 1990 and 2010, this country alone increased cultivated area “by 731 percent, yields by 45 percent and total production by 1,102 percent,” according to the study conducted by researchers with various U.S. institutions. Overall, coffee cultivation in Asia has risen significantly since 1990.

However, land used to cultivate shade-grown coffee has decreased by 20 percent globally since 1996, with rapid conversion to sun-grown coffee. In total, only 24 percent of the total cultivation belongs to shade practices. There are a variety of reasons why farmers, both large-scale and small-scale, are making the change. These include development of coffee varieties that are more tolerant of sun exposure in effort to combat fungal diseases that are problematic in shady areas, as well as to increase production.

“To the extent that smallholders are intensifying their production and thinning out shade trees (we have seen some evidence for this in parts of Nicaragua and elsewhere), it is often with the goal of planting more coffee bushes per unit of area and increasing coffee yields in the short term,” coauthor Christopher Bacon told mongabay.com. “However, we know that this would decrease the yields of other non-timber forest products such as firewood, fruits, and medicinal plants all gathered from shade coffee farmers.”

According to Bacon, incentives encourage farmers to intensify production by shifting away from shade-grown practices.

“The incentives for this are highly context dependent and could include the availability of longer-term credit, three to five years in some cases, and government and business led programs promoting the intensification of coffee production, technical assistance, and the introduction of newer crop varieties,” he said. ” Higher coffee prices since 2005 could also influence this decision.”

Several other factors add to the degree of complexity in coffee management trends. According to the study, five of the most important are cultivar origin, disease resistance, yield trends, socioeconomic drivers behind livelihood decisions and economic shifts driving market trends.

There are two main coffee bean species: Arabica (C. arabica) and robusta (C. canephora). Diseases, in particular by fungi, are difficult to mitigate. Leaf rust is the most common problem and can persist even in crops of high-yielding and disease-resistant beans. The move towards sun-grown coffee is driven in part by the commonly held assumption that sun exposure prevents fungal infections. However, some studies have suggested that shade coffee is better at fighting disease than is sun-grown coffee as canopy cover may cause difficulty in fungal spore dispersal.

The shift towards sun-grown began in the 1970s when coffee research institutes started being influenced by yield-focused government incentives. Programs were created to support more intensified practices along with subsidies for pesticide use. However, the authors argue that it as-yet remains unclear whether or not sun coffee produces considerably higher yields in comparison to shade-grown.

Transition to sun coffee is further influenced by livelihoods and cultural history. Although small-scale producers are more likely than large-scale producers to continue with the traditional shade-grown method, many are still moving towards sun coffee. For farmers whose sole incomes come from coffee production, sun-grown may seem more financially appealing.

Yet, many farmers also depend on non-coffee forest products, such as firewood, that are often byproducts of shade-grown methods. The authors highlight the difficulty farmers frequently have receiving profits when coffee pickers and laborers are handed the lowest paycheck. Even with specialty coffees being sold at higher retail values, this doesn’t necessarily lead to more revenue for farmers. Worryingly, some farmers still suffer from problems such as seasonal hunger.

The report includes some encouraging developments, such as the expansion of fair trade and eco-labeling schemes. An estimated 10 percent of coffee sold in 2007 had at least one sustainability certification attached to it. The Bird Friendly certification program is an example of a scheme that upholds the highest standards, including organic certification of more than ten shade tree species. Both fair trade and organic certification have been shown to provide farmers with more access to credit and technical support. However, cost issues may arise for coffee producers who are required to pay fees in order to join certification schemes, and a direct link to increased food security is not always present.

“From my own research in Nicaragua and other studies throughout the region we also know that there are hundreds of orchids (likely thousands of species of orchids and other [plants that grow on trees]) conserved in the shade trees grown above the coffee and nearly [all] orchids are endangered,” he said. “The trees, the biomass and all the associated biodiversity directly linked to shade trees are lost with the conversion from shade to sun coffee.”

Shade coffee systems also play a role in preserving connectivity within forests, especially fragmented areas. Providing corridors for animals such as migratory birds and pollinators (e.g., butterflies) is crucial for a healthy, functioning ecosystem. Shade systems are additionally beneficial for curbing environmental shifts from climate change. Landslides occurring after hurricanes are mitigated by habitats with high tree density and diversity that are provided by shade systems. Even so, increasing temperatures due to global warming could force coffee production to higher, cooler elevations, which may lead to deforestation in these areas.

The situation is complex, the incentives behind management decisions are numerous and the local and global drivers behind coffee production remain diverse. The study concludes by suggesting that certification schemes should be improved by providing incentives and discounts to small-scale farmers who are otherwise unable to qualify for these programs. The authors also believe that various institutions should be required to investigate existing schemes and oversee new members to ensure successful sun-to-shade transitions for noncertified farmers. Diversification of farming practices could lead to more government involvement through a support framework and policy making, which may in turn result in more properly addressed health and hunger issues.

However, food security is not necessarily reachable by sustainable coffee production. According to Bacon, “…[there is a] need for follow-up research concerning possible trade-offs and synergies between carbon sequestration and biodiversity conservation and farmer livelihoods (especially food security) in smallholder managed shade coffee landscapes…at certain estimated thresholds (thresholds are difficult to identify and depend on the scenarios developed) increasing carbon-storage efforts (potentially to receive carbon sequestration payments) could negatively impact food crops and household food security.”

Bacon also believes more research is needed to better understand the impacts coffee growing has on small farmers, and how to improve their situation.

“Given my recent research documenting seasonal hunger among smallholders in shade coffee landscapes, it is important to develop future research analyzing these questions,” he said. “It is also possible that dynamic smallholder cooperatives could play an important brokering role in navigating the transactions costs associated with ecosystem service compensation schemes.”

Since 1989, governmental policy has decreased its jurisdiction over coffee production on both local and global scales. The authors suggest that governments should become more active in supporting farmers. Payment for ecosystem services provided by shade growing practices is one option they recommend, although it can be difficult to measure the full impacts from this kind of method. The study further suggests a multifaceted approach to support, which could come from several institutions including local, regional and national cooperatives. Farmers who are already engaged in sustainable practice should be provided with appropriate incentives and infrastructure to continue their management.

Many people can influence changes in management trends and coffee production, including consumers. Sustainably grown coffee is possible on a much larger scale than is happening now and requires a better understanding of socioeconomic factors, diversification of coffee farms and improvements of the reward and certification systems for ecosystem services. Refining relationships between the people involved on every level of coffee production may allow not only increased transparency, but also enhancement of coffee production worldwide.

This article was originally written and published by Nika Levikov, a contributing writer for news.mongabay.com. For the original article and more information, please click HERE.