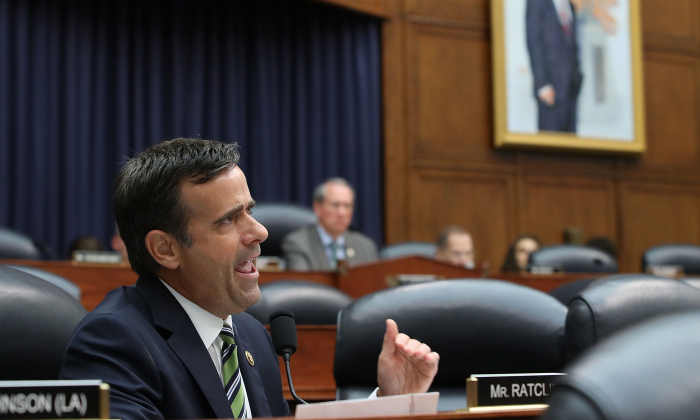 Congressmen have viewed classified documents containing exculpatory evidence that undermines the pretext of the investigation of alleged ties between the Trump campaign and Russia, according to Rep. John Ratcliffe (R-Texas).

The FBI began a counterintelligence investigation of the Trump campaign in late July 2016, with the pretext for the probe being a meeting between Trump campaign associate George Papadopoulos and Australian diplomat Alexander Downer. The pair allegedly spoke about Russians being in possession of Democratic Party presidential candidate Hillary Clinton’s emails.

Obama administration officials at the Department of Justice (DOJ) and the FBI used intelligence about the Papadopoulos–Downer meeting to launch “Crossfire Hurricane,” the codename for the Russia investigation. The same Obama administration officials were aware of evidence that directly contradicted the intelligence about the meeting but didn’t include it months later as part of a surveillance-court application to spy on another Trump campaign associate, Carter Page.

“Hypothetically, if the Department of Justice or the FBI has another piece of evidence that directly refutes that—that directly contradicts that—what you would expect is for the Justice Department to present both sides of the coin to the Foreign Intelligence Surveillance Court to evaluate the weight and sufficiency of that evidence,” Ratcliffe told Fox News on Oct. 14.

“Instead, what happened here was the Department of Justice and FBI officials in the Obama administration in October of 2016 only presented to the court the evidence that made the government’s case to get a warrant to spy on a Trump campaign associate. Declassification would corroborate what I just related to you.”

Papadopoulos was sentenced to 14 days in prison in September for lying to the FBI. Court documents filed by special counsel Robert Mueller, the head of the Russia investigation, allege that Papadopoulos met with Joseph Mifsud, a professor with allegedly deep ties to Russia.

Little evidence exists to back up claims of Mifsud’s ties to Russia, but the Maltese professor does have extensive ties to Western intelligence.

Papadopoulos has suggested that he was the target of British and Australian intelligence operations. In recent days, he has shared photographs of Mifsud with senior British lawmakers, including Claire Smith, the senior member of the British committee on intelligence, and Boris Johnson, the British foreign minister.

“Another example of UK incompetence or complicity? Here is Joseph Mifsud a year after I notified the FBI that he was a ‘suspected Russian agent’ with none other than the British Foreign Minister, Boris Johnson,” Papadopoulos wrote on Twitter along with Johnson’s photo. “Strange that a ‘Russian agent’ gets such access to the top in the UK.”

Ratcliffe is part of a joint committee investigation into actions taken by the FBI and DOJ in 2016 and 2017 in connection to the Russia investigation. During the week of Oct. 14, the lawmakers expect to hear from three key witnesses: Fusion GPS co-founder Glenn Simpson on Oct. 16, former FBI general counsel James Baker on Oct. 18, and Nellie Ohr, the wife of senior Justice Department official Bruce Ohr, on Oct. 19.

Simpson told lawmakers via his attorney that he plans to plead the Fifth Amendment to avoid self-incrimination. Simpson previously testified under oath that he didn’t meet with Bruce Ohr before the FBI applied for a warrant to spy on Page in October 2016. According to Ratcliffe, that statement is in conflict with what Ohr told lawmakers.

Baker is testifying for the second time to answer additional questions about an allegation, made by anonymous sources, that Deputy Attorney General Rod Rosenstein discussed a plan last year to record President Donald Trump. Rosenstein denies the allegation.

Lawmakers plan to question Nellie Ohr about her work on the dossier of unsubstantiated claims about Trump that became the basis for the warrant to spy on Trump. The Clinton campaign and the Democratic National Committee paid for the dossier, a fact which, at the time, was concealed from the surveillance court.