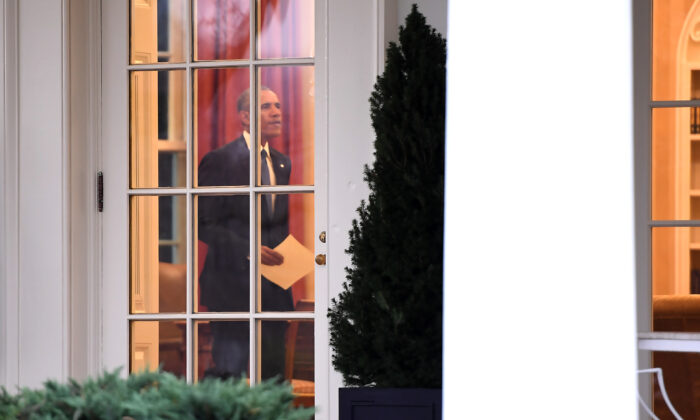 President Barack Obama is seen in the Oval Office at the White House on Jan. 20, 2017. (JIM WATSON/AFP via Getty Images)

Inspector General Michael Horowitz in his report detailed a last-minute flurry of activity that transpired ahead of the issuance of the Page FISA, including a possible intervention from then-Deputy FBI Director Andrew McCabe, to push a seemingly reluctant DOJ official, Stuart Evans, for approval.

[3:11 p.m.] FBI lawyer Lisa Page texts McCabe: “OI [Office of Intelligence] now has a robust explanation re any possible bias of the chs in the package. Don’t know what the holdup is now, other than Stu’s continued concerns. Strong operational need to have in place before Monday if at all possible, which means ct tomorrow. [Footnote 276] I communicated you and boss’s greenlight to Stu earlier, and just sent an email to Stu asking where things stood. This might take a high-level push. Will keep you posted.”

[3:13 p.m.] Page texts McCabe: “If I have not heard back from Stu in an hour, I will invoke your name to say you want to know where things are, so long as okay with you.”

“Footnote 276” was initially redacted in the public version of the IG report, but was declassified, among other footnotes, following a request from Sens. Ron Johnson (R-Wis.) and Chuck Grassley (R-Iowa). In the declassified footnote, the IG elaborated on the urgency behind Lisa Page’s communications with McCabe:

“[Redacted] As described below, it appears the desire to have FISA authority in place before Monday, October 17, was due, at least in part, to the fact that Carter Page was expected to travel to the United Kingdom and South Africa shortly thereafter, and the Crossfire Hurricane team wanted FISA coverage targeting Carter Page in place before that trip.”

Another unredacted footnote pertained to the FISA signoff by then-Deputy Attorney General Sally Yates, noting that her approval provided the requisite authorization required under Executive Order 12333, Section 2.5, which requires that the attorney general “has determined in each case that there is probable cause to believe that the technique is directed against a foreign power or an agent of a foreign power.” The unredacted footnote, number 293, reads:

“Her signature also specifically authorized overseas surveillance of Carter Page under Section 705(b) of the FISA and Executive Order 12333 Section 2.5”

During congressional testimony on Aug. 31, 2018, Trisha Anderson, the principal deputy general counsel for the FBI and head of the bureau’s National Security and Cyber Law Branch, highlighted the unusual nature of the Page FISA application process and the unusual roles of McCabe and Yates, who provided approvals of the Page FISA before regular FBI and DOJ approvals had been obtained:

“There were individuals, all the way up to the Deputy Director and the Deputy Attorney General on the DOJ side, who had essentially given their approval to the FISA before it got to that step in the process. That part of it was unusual, and so I didn’t consider my review at that point in the process to be substantive in nature,” Anderson told congressional investigators.

A major problem with the issuance of the Page FISA was that information had been provided to the FBI indicating that Page had previously worked with or on behalf of another agency, likely the CIA. That information, if provided to the Office of Intelligence (OI) or the FISA court, would have made it significantly more difficult for the FBI to claim that Page was “an agent of a foreign power.”

On Jan. 3, 2017, another section of Executive Order 12333, Section 2.3 Procedures for the Availability or Dissemination of Raw Signals Intelligence Information by the NSA [National Security Agency], was signed into effect by the Obama administration. James Clapper, the director of national intelligence, signed off on Section 2.3 on Dec. 15, 2016, and the order was finalized when Attorney General Loretta Lynch signed it on Jan. 3, 2017.

The new order allowed for the other intelligence agencies to ask the NSA for access to specific surveillance simply by claiming the intercepts contain relevant information that would be useful to a particular mission. Crucially, privacy protection of the underlying raw data was specifically bypassed by the order.

As The New York Times noted at the time, “the new rules significantly relax longstanding limits on what the N.S.A. may do with the information gathered by its most powerful surveillance operations, which are largely unregulated by American wiretapping laws.”

On its face, the rule was supposedly put in place in order to reduce the risk that “the N.S.A. will fail to recognize that a piece of information would be valuable to another agency,” but in reality, it dramatically expanded government officials’ access to the private information of American citizens.

As noted by the NY Times, historically, “the N.S.A. filtered information before sharing intercepted communications with another agency, like the C.I.A. or the intelligence branches of the F.B.I. and the Drug Enforcement Administration. The N.S.A.’s analysts passed on only information they deemed pertinent, screening out the identities of innocent people and irrelevant personal information.”

However, with the Jan. 3, 2017, approval of Section 2.3, and the associated expansion of sharing globally intercepted communications, other intelligence agencies would  be able to search “directly through raw repositories of communications intercepted by the N.S.A. and then apply such rules for ‘minimizing’ privacy intrusions.”

The requirement for this broad latitude was fairly simple and spelled out in the executive order.

An “Intelligence Community element” may “intentionally select foreign communications of or concerning a U.S. person or a person in the United States if the element’s compliance organization or legal counsel confirms that” the targeted person is a “current FISA target” or has been determined to be “an agent of a foreign power or employee of a foreign power” and the “purpose of the selection is to acquire significant foreign intelligence or counterintelligence information.”

As of Oct. 21, 2016, although it wasn’t known to the public, Carter Page met these requirements.

When the order was signed, many wondered at the timing and questioned why there was a  pressing need to rush an order that allowed for significant expansion in the sharing of raw intelligence among agencies during the final days of the Obama administration.

An equally valid question was why was the order so overdue.

Section 2.3 was reported as being on “the verge” of finalization in late February 2016 as reported by the NY Times:

“Robert S. Litt, the general counsel in the office of the Director of National Intelligence, said that the administration had developed and was fine-tuning what is now a 21-page draft set of procedures to permit the sharing.”

It had been anticipated that the order would be finalized by early- to mid-2016.

Interestingly, the finalized version contained a provision relating to “Political Process” that hadn’t been in place in earlier versions of Section 2.3:

“3. (U) Political Process in the United States. [Any IC element that obtains access to raw SIGINT under these Procedures will] Not engage in any intelligence activity authorized by these Procedures, including disseminations to the White House, for the purpose of affecting the political process in the United States. The IC element will comply with the guidance applicable to NSA regarding the application of this prohibition. Questions about whether a particular activity falls within this prohibition will be resolved in consultation with the element’s legal counsel and the General Counsel of the Office of the Director of National Intelligence (ODNI) (and the DoD’s Office of the General Counsel in the case of a DoD IC element).” [emphasis added]

If the above language had been implemented in early 2016 as originally scheduled, dissemination of any raw intelligence on or relating to the Trump campaign to officials within the Obama White House would likely have been made more difficult or prohibited.

On July 27, 2017, Devin Nunes (R-Calif), then-chairman of the House Intelligence Committee, sent a letter to the Director of National Intelligence Dan Coats regarding the ongoing leaks of classified information and the need for new unmasking legislation to address the problem.

Nunes’s letter specifically pointed out officials within the Obama administration:

“We have found evidence that current and former government officials had easy access to U.S. person information and that it is possible that they used this information to achieve partisan political purposes, including the selective, anonymous leaking of such information.”

Nunes noted that one particular official within the Obama administration had made a huge number of unmasking request in 2016:

“This committee has learned that one official, whose position had no apparent intelligence related function, made hundreds of unmasking requests during the final year of the Obama administration. Of those requests, only one offered a justification that was not boilerplate and articulated why that specific official required the U.S. person information for the performance of his or her official duties.”

That unnamed individual is almost certainly former U.N. Ambassador Samantha Power. Interestingly, Power has denied that she was the person making the unmasking requests.

“Her testimony is they may be under my name, but I did not make those requests,” then-House Oversight Committee Chairman Trey Gowdy (R-S.C.) said of Power during an interview with Fox News’ Bret Baier in October 2017.

The letter from Nunes also specified that Obama officials sought information from intelligence reports that was specific to “Trump transition officials”:

“The Committee also understands that Obama-era officials sought the identities of Trump transition officials within intelligence reports. However, there was no meaningful explanation offered by these officials as to why they needed or how they would use this U.S. person information, and thus, the Committee is left with the impression that these officials may have used this information for improper purposes, including the possibility of leaking. More pointedly, some of the requests for unminimized U.S. person information were followed by anonymous leaks of those names to the media.”

Nunes told Coats that his committee had “found that the Intelligence Community’s U.S. person unmasking policies are inadequate to prevent abuse, such as political spying” and asked for help from Coats’s office in drafting legislation to fix the issue.

That wasn’t the first time that Nunes had made mention of dissemination of information from intelligence channels. On March 22, 2017, after learning of the unmasking of members of the Trump transition team, Nunes gave an impromptu press conference, followed by a more formal press conference later that day.

“This is information that was brought to me that I thought the President needed to know about incidental collection, where the President himself and others in the Trump transition team were clearly put into intelligence reports that ended up at this White House and across a whole bunch of other agencies,” Nunes said.

The press conference from Nunes followed an earlier March 2, 2017 MSNBC interview with Obama’s  Deputy Assistant Secretary of Defense Evelyn Farkas. In the interview, Farkas detailed how the Obama administration gathered and disseminated intelligence on the Trump Team, as well as how the information was disseminated:

“I was urging my former colleagues, and, frankly speaking, the people on the Hill, it was more, actually, aimed at telling the Hill people: Get as much information as you can, get as much intelligence as you can, before President Obama leaves the administration, because I had a fear that somehow that information would disappear with the senior people that left. So it would be hidden away in the bureaucracy.

The Trump folks, if they found out how we knew what we knew about the Trump staff dealing with Russians, that they would try to compromise those sources and methods, meaning we would no longer have access to that intelligence.”