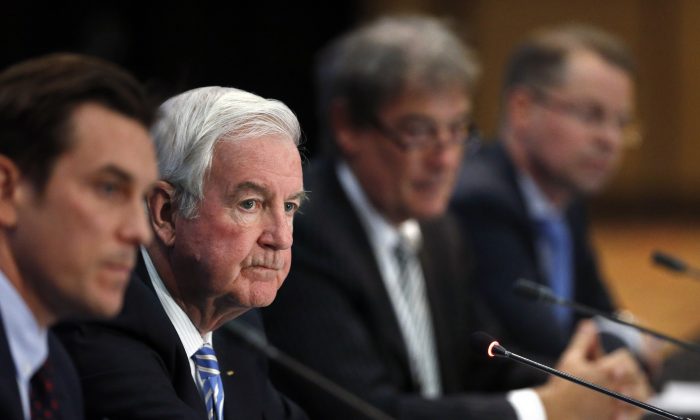 Craig Reedie (2L), president of the World Anti-Doping Agency (WADA), listens to a question during a news conference following a meeting in which WADA leadership voted to declare Russia's anti-doping operation out of compliance, in Colorado Springs, Colo., on Nov. 18, 2015. (AP Photo/Brennan Linsley)
Sports

LONDON—As the clock ticks down to the opening ceremony in Rio de Janeiro, international Olympic leaders are facing a seminal moment.

With the credibility of the fight against doping on the line and the image of the Olympic movement at stake, the IOC will hold a crucial meeting Sunday to consider whether to ban Russia entirely from the Rio Games because of systematic, state-sponsored cheating.

Short of a blanket ban, the International Olympic Committee could leave it to individual sports federations to decide on a case-by-case basis whether to allow Russian athletes in their events.

The doping crisis represents one of the Olympic movement’s biggest challenges since the boycott era of the 1980s, and how it plays out may well define Thomas Bach’s IOC presidency.

The IOC’s ruling 15-member executive board will meet via teleconference to weigh the unprecedented step of excluding Russia as a whole from the games. Bach and others have spoken of a need to balance “individual justice” versus “collective punishment.”

Time is of the essence, with the games set to open in Rio on Aug. 5.

Russia’s track and field athletes have already been banned by the IAAF, the sport’s governing body, following allegations of state-directed doping — a decision that was upheld Thursday by the Court of Arbitration for Sport.

Calls for a complete ban on Russia have intensified since Monday when Richard McLaren, a Canadian lawyer commissioned by the World Anti-Doping Agency, issued a report accusing Russia’s sports ministry of overseeing a vast doping program of its Olympic athletes.

McLaren’s investigation, based heavily on evidence from former Moscow doping lab director Grigory Rodchenkov, affirmed allegations of brazen manipulation of Russian urine samples at the 2014 Winter Games in Sochi, but also found that state-backed doping had involved 28 summer and winter sports from 2011 to 2015.

Bach said the findings showed a “shocking and unprecedented attack on the integrity of sports and on the Olympic Games” and declared the IOC “will not hesitate to take the toughest sanctions available against any individual or organization implicated.”

Russia also faces a possible ban from the Paralympic Games. Citing evidence in McLaren’s report of doping among Russian Paralympic athletes, the International Paralympic Committee said Friday it will decide next month whether to exclude the country from the Sept. 7-18 event in Rio.

The decision for the IOC is loaded with geopolitical ramifications.

Never has a country been kicked out the Olympics for doping violations. And Vladimir Putin’s Russia is a sports powerhouse, a huge country seeking to reaffirm its status on the world stage, and a major player in the Olympic movement. Many international Olympic officials and federation leaders have close ties to Russia, which has portrayed the exclusion of its track athletes and calls for a complete ban as part of a political, Western-led campaign.

Putin, citing the U.S. and Soviet-led boycotts of the 1980 and 1984 Games, said the Olympic movement “could once again find itself on the brink of a division.”

Former Soviet leader Mikhail Gorbachev wrote an open letter to Bach on Friday to plead against a blanket ban.

“I am worried and deeply upset by the possibility that in the case of a ban on Russian athletes competing in the Olympics, the innocent will be punished along with the guilty,” Gorbachev wrote. “For me the principle of collective punishment is unacceptable.”

Bach and other Olympic officials have repeatedly cited the difference between collective and individual punishment.

“It is obvious,” Bach said last week, “that you cannot punish a badminton player for infringement of rules or manipulation by an official or a lab director in the Winter Games.”

For many in the anti-doping community, however, the choice is simple: The extent of state-backed doping in Russia has tainted the country’s entire sports system and the only way to ensure a level playing field is to bar the whole team, even if some innocent athletes will lose out.

Former WADA president Dick Pound, a senior IOC member from Canada, accused Bach of dithering and failing to live up to his “zero tolerance” line on doping.

“You can’t have zero tolerance, but say, of course it’s Russia,” Pound told The Associated Press. “You have to go down trying to defend your policies, rather than shuffle the responsibility off in all other sorts of directions.”

Pound said the IOC will face a backlash if it decides against a full ban.

“I think it will go down very badly,” he said. “I think there will be an athletes’ revolt, a public revolt, maybe even the sponsors. You’ve got to take control of it, and show your leadership. The hesitation makes it looks worse and worse.”

WADA and many national anti-doping agencies and athletes’ groups have led the calls for a total Russian ban from Rio.

A coalition of 14 national anti-doping agencies sent a letter to Bach saying the IOC’s initial response did not meet his pledge of the “toughest sanctions available.” The group called on the IOC to suspend the Russian Olympic Committee and set up a task force that could allow certain Russians to compete under a neutral flag if proven to be clean.

“The scale, coordination and leadership of a doping system like this is arguably the most heinous crime possible against the Olympic movement,” Britain’s Adam Pengilly, a two-time Olympian in skeleton who serves as an athlete member of the IOC, told the BBC. “So, somewhat reluctantly, I am led to one conclusion: exclusion from Rio.”

Richard Ings, former head of Australia’s anti-doping agency, told the AP: “Any Russian Olympic sport athlete who had not been subject to independent testing in recent months should not be in Rio. It’s not about whether you were doping or not. That can’t be proved either way. What this must be about is, ‘Were you subject to compliant independent testing?'”

But the summer federations may not have all the information they need from the McLaren report to act. Some sports, such as gymnastics, were not cited in the report and feel there is no justification to ban Russians. And the federations all have different rules.

“This is our predicament,” said Andrew Ryan, director of the Association of Summer Olympic International Federations, which represents the 28 sports in the games. “We accept there is a collective responsibility and some IFs can address that, but the vast majority don’t have that within their rules. For the IOC, it is more simple.”