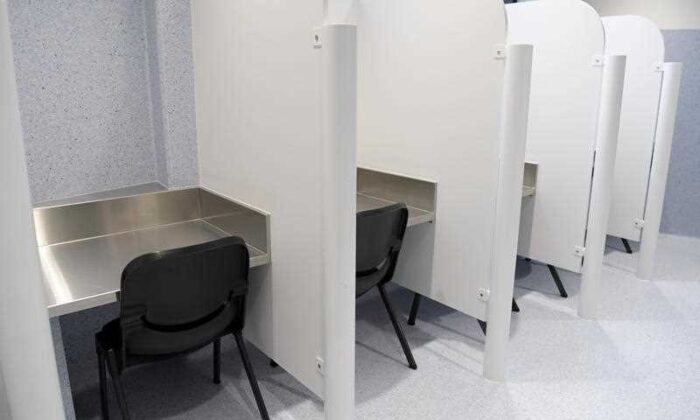 A proposal to build a second “medically supervised injecting room” in the Australian city of Melbourne will be kept under wraps until after the November state election, Victoria’s premier Daniel Andrews said on Aug. 9.

This follows a push from the Melbourne City Council, which has demanded the “urgent” release of the proposed injecting room report by former Chief Commissioner of Victoria Police Ken Lay.

“I think that’s unlikely, principally because Ken Lay’s not finished his work … and I’m not certain when that work will be finished,” Andrews said at a presser on Aug. 9, adding that Lay was an “outstanding Victorian” who will finish the work.

“Then a proposal will be put to the parliament, and it will have to pass. The actual address needs to be in the law; this is not a simple process,” Andrews said.

“I wouldn’t want anyone to be critical of Ken and the work he’s doing; he’s working extremely hard. Circumstances have changed.”

However, opposition mental health spokeswoman Emma Kealy told reporters on Aug. 9 that the Andrews government was “hiding” the report and said Victorians needed to know about the injecting room proposal before the state election.

In July 2020, Lay was appointed by the Andrews government to lead the consultation process on the proposed second drug injecting room. Lay was due to present the report at the end of 2020. However, the report has yet to be finalised.

The Andrews government has blamed the pandemic on the delays saying that restrictions have limited community consultation.

In a November 2021 statement, Victoria’s Department of Health said that it accepted all the recommendations made by the Independent Review Panel into Victoria’s first Medically Supervised Injecting Room, which included establishing a second injecting room in the City of Melbourne.

In early 2021, the former Yooralla facility at 244 Flinders Street was purchased by the state government and the facility is believed to be the proposed site for the second injecting room, according to The Age.

Originally, the second site was proposed at cohealth Central Melbourne on Victoria Street, between Swanston and Elizabeth Street. However, this proposal sparked concerns from residents, market stall holders and Melbourne City Council.

According to the independent review, the “medically supervised injecting room” in North Richmond had almost 120,000 visits in the first 18 months, and modelling suggests that “at least 21 – 27 lives have been saved.”

The review also states that there was reduced ambulance attendances due to overdoses and reduced public injecting, with users accessing other health and support services.

“The facility in Richmond has saved 44 lives and has responded to 4500 overdoses,” Andrews said.

“Not everybody supports it, but it’s not about getting universal support. If you tried to get universal support to save the lives of injecting drug users, then we would still be seeing people dying in gutters.”

However, the City of Melbourne motion states that in the first 10 months of the facility being open, the number of “inappropriately disposed syringes” collected in the surrounding area increased by 27 percent, compared with the 10 months before the injecting room opened.

The motion also states that there were more heroin-related deaths within one kilometre of the North Richmond injecting room in the 12-month period after it opened compared to the 12 months prior.

“Traders on Degraves Street fear the Andrews Labor government will push ahead with its plans for a second injecting room at the old Yooralla building on Flinders St without seeing Mr Lay’s final recommendations,” Kealy said.

“Children at the primary school next door to the Richmond injecting room have been exposed to traumatic scenes of dead bodies, daily drug abuse and drug crime.”

Lay is expected to complete the report by “early next year” as he officially finishes up his tenure as chairman of the Forensicare and Ambulance Victoria boards on Aug. 25.