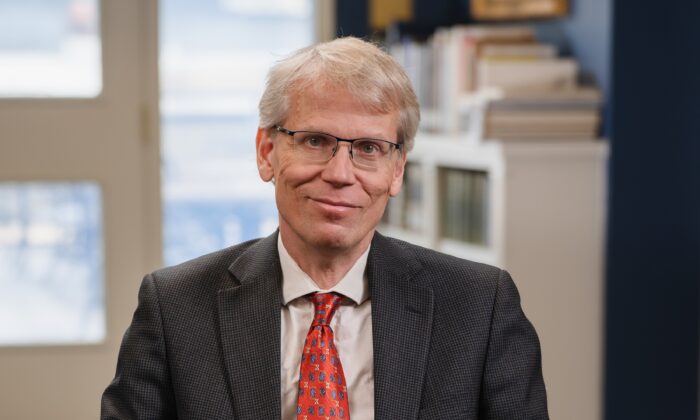 The current scientific paradigm needs to change to lessen reliance on journals and major funding entities such as the National Institutes of Health (NIH), Martin Kulldorff says.

The COVID-19 pandemic has laid bare the serious problems with the system, including how a select few control much of the financial support available to researchers in the United States and other Western countries, Kulldorff, the senior scientific director at the Brownstone Institute, told EpochTV’s “American Thought Leaders.”

“The scientific structures are broken,” said Kulldorff, one of the authors of the Great Barrington Declaration and a founding fellow of Hillsdale College’s Academy for Science and Freedom.

Many scientists need to publish scientific papers to advance in their careers. Some journals are considered more prestigious than others. Scientists try to get published in the journals with better reputations. Editors and reviewers at journals control what gets published.

To carry out studies, scientists need to obtain funding. The NIH is the top funder of research in the United States. Organizations headed by officials with similar ideologies as the top officials in the U.S. fund research elsewhere, such as the Wellcome Trust in the United Kingdom, Kulldorff said.

The third leg of building a scientific career—getting evaluated by peers—is the most decentralized but is still controlled by, in a number of cases, a small group.

“Even there you need evaluation letters from other people in your field, from other universities,” Kulldorff said. “So you have a same group of people who are evaluating the grants or evaluating who should get published to the prestigious journals and who gets promoted. So you have to be part of that group to succeed in science. And I think that leaves a lot of groupthink in that people do not dare to go out on the edge or on the fringe, or to voice views that are sort of contrary to the senior people who control these, what Dr. [Sunetra] Gupta calls cartels.”

The system works well in some specialties or countries where people who are open-minded are in control, but in others it does not, Kulldorff said. Overall, he believes it has led to “a centralization of science.”

“And we can see, actually, during the pandemic, that some of the best research did not come from the U.S., the UK—places considered the powerhouses of science—but came from places like Qatar or Israel or Denmark or Sweden or Iceland. And I think the reason is that they are a little bit, they’re not removed from these cartels, but they’re a little bit on the periphery, especially with the funding situation. They still have to publish in the same journals and so on but in terms of the funding, they’re a little bit on the periphery,” he said.

“So I think that’s an indication that within sort of the center of science in the U.S. and UK, there wasn’t this ability to do the research needed to get the knowledge that we needed to deal with this pandemic. I think this is because of this cartel system.”

Few studies were performed early in the pandemic on potential treatments for COVID-19 and little effort was extended to explore how well natural immunity, or the protection one enjoys following COVID-19 infection, held up. Studies, primarily from Israel and other countries outside the United States, later found natural immunity was superior to vaccination.

There has also continued to be a lack of strong research in areas of contention such as masking, with the U.S. Centers for Disease Control and Prevention relying on data comparisons as opposed to randomized clinical trials. The best-designed masking trials, one conducted in Denmark and one carried out in Bangladesh, found little to no benefit for masks.

Kulldorff sees multipronged solutions, including decentralizing research funding and having universities publish their own scientists as opposed to relying on journals to certify research.

“If each university published their own research, that would mean that scientists can just put it out there immediately without delay, which is important, and there’s no prestige in which journal you publish in so the [paper] has to sort of stand on its own feet,” he said. “Then we can judge the papers by themselves, by what other people think about that paper, the number of citations it gets, the attention it gets, if people write about it, if it leads to breakthroughs.”

Scientists who build a list of well-regarded publications could then be awarded money to pursue important research, where under the current funding system, it can take months or even over a year to get support for a project.

“If there was a situation where scientists got their research based on prior performance instead of what they’re promising to do, then they could easily shift their emphasis on what they’re doing to what happens to be the most interesting. I think scientists are good at finding interesting questions and trying to solve them. That’s what scientists supposed to do,” Kulldorff said. “And the competitive nature is good in that sense because they all want to sort of be the first of finding the new, important findings.”