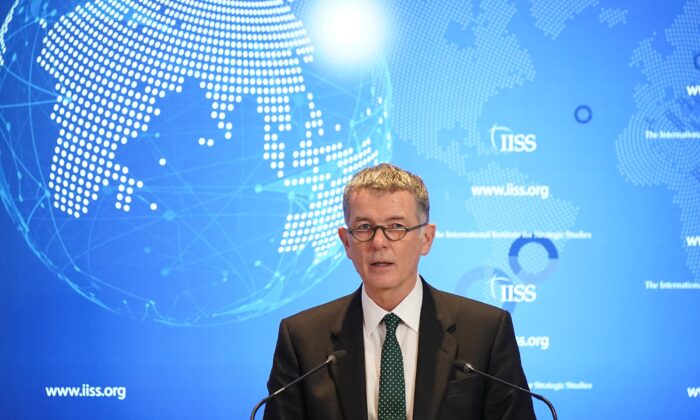 On the second day of the Russian invasion of Ukraine, the head of the British foreign secret service, known as MI6, tweeted the following:

“With the tragedy and destruction unfolding so distressingly in Ukraine, we should remember the values and hard won freedoms that distinguish us from Putin, none more than LGBT+ rights.”

In other words, in the opinion of the head of this service, a transgender woman’s right to cheat at women’s sports by claiming to be a woman in the full sense of the word, while retaining some of the inherited biological advantages of her birth sex, is on a par with the right to free speech and a free press, the protection against arbitrary arrest, and so on.

It’s possible, I suppose, that the head of MI6 was playing a clever double game: trying falsely to reassure Vladimir Putin that the West was as decadent, feeble, and divided as his previous experience of it had led him understandably to believe; in other words, it might have been the kind of bluff to mislead the enemy that one reads about in spy novels.

On the other hand, however, it might truly represent the convictions—which somehow combine the qualities of being deep and shallow at the same time—of those in charge of securing the safety and security of the country. Heaven forfend!

When the government of Hungary announced that it wanted to hold a referendum on a proposed law that would forbid the teaching or propagandizing of homosexuality or transgenderism, the head of the European Commission, Ursula von der Leyen, thundered that Hungary was trampling on the most sacred principle of the European Union and that it wouldn’t permit discrimination against anybody in European society.

I have my doubt about the wisdom of such a law. It’s true that there are ideological fanatics who attempt to teach very young children the supposed glories of gender fluidity and induce them to experience it for themselves. In one school in the city of Birmingham, England, in which the great majority of pupils came from Muslim homes, teachers did precisely this, thereby causing the parents to demonstrate outside the school and achieving the remarkable and hitherto impossible feat of causing most of the population to sympathize with women dressed in black niqabs.

But the whirligig of time brings in his revenges, to quote Shakespeare once again (after all, he said almost everything worth saying). No matter how sensible in the abstract a prohibition may be, the opposition, when it comes into power, as one day it will, is obliged to reverse it as a matter of principle, the principle being the absolute need to distinguish itself from the previous government, irrespective of the effect of doing so on society. In the short term, this dialectic gives fanatics an inherent advantage in our society: But fanaticisms come and go, and direct conflict is what they thrive on. Boredom with a cause eventually sets in and dilutes the effect of fanaticism.

Wise or not, Hungary’s proposed law was claimed by von der Leyen to be contrary to the fundamental or founding principles of the European Union. (I have no great admiration for the founders of the European Union, but I doubt they had transgender rights in the forefronts of their minds when they founded it.) Of course, her ringing assertion the European Union won’t allow anyone in its society to be discriminated against is either a lie or stupidity.

Life itself imposes the obligation to discriminate, between good and bad, right and wrong, beauty and ugliness, wisdom and foolishness, cleverness and idiocy, prudence and bravery, and so forth. We must discriminate even between two things both of which are desirable in themselves, when we cannot have both. Certain people must be discriminated against—for example, serial killers and terrorists.

Borders within Europe may have been partially abolished (though resurrected soon enough when a crisis occurs), but there are still borders between Europe and the rest of the world. Illegal immigrants will continue to be discriminated against, ineffectually no doubt given the total administrative incompetence of most countries, but still as a matter of principle.

One of the problems with Western society that has made it not only appear to but actually be decadent is what might be called its umbilicism, the habit of navel-gazing as if there were no world exterior to itself. Only navel-gazers could imagine that questions raised by transgenderism are serious. The West pretends to multiculturalism but has no real interest in developments outside its own borders. Like spoiled children growing up in the lap of luxury, it can’t imagine a world that doesn’t respond to its whims, let alone that threatens it, and this despite its catastrophic history almost within living memory. The failure of the imagination is almost total.

When authoritarian leaders of powerful countries see statues erected to a man merely because he was killed by a policeman, and sanctified although he had led a thoroughly bad and indeed vicious life, they must surely think that the West is an overripe fruit that needs only a little shake to drop from the tree, incapable as it appears to be of distinguishing between a minor event and a major threat. For them, a serious country is one that can lock up thousands if not millions of its citizens with impunity, control access to information, and arm itself to the teeth, with or without impoverishing the entire nation.

Our challenge is to prove them wrong. For all our faults, our weaknesses, our foolishness, our dishonesties, our willful blindness, our errors, our self-indulgence, our way of life is incomparably superior to theirs, at least for us, and must be defended. The verdict on whether we have the resolve to do so is not yet in, but not all the auguries are good.