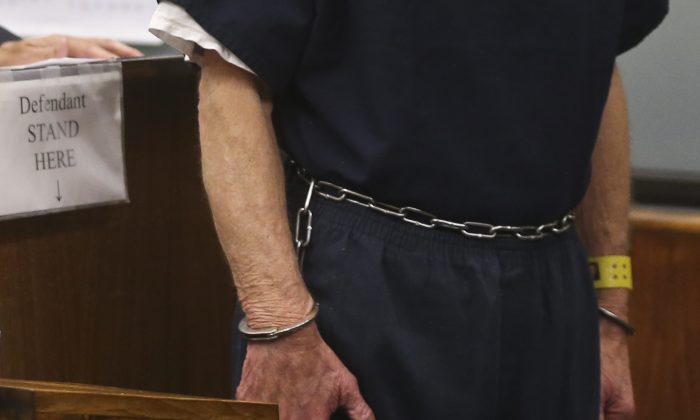 Frank John Selas shackled hands rest at his side as he is arraigned in San Diego on Jan. 27, 2016. Salas who once hosted a children's show on local television under the name "Mr. Wonder" was arrested on charges he sexually abused children during a camping retreat nearly four decades ago. (AP Photo)
Crime and Incidents

BONITA, Calif.—Neighbors in a well-to-do section of this San Diego suburb knew him as Frank Szeles, a friendly Cub Scouts leader who frequently gave swimming lessons to young children in his backyard pool.

The federal agents who arrested him last week knew him by a different name: “Mr. Wonder,” the host of a popular children’s television show who vanished decades ago amid allegations that he sexually abused several kids during a camping retreat in central Louisiana.

The man who faced a San Diego judge Wednesday denied he is the 76-year-old fugitive named Frank John Selas III who allegedly fled to Brazil in 1979 after Louisiana authorities secured a warrant for his arrest.

Back in Louisiana, Rapides Parish Sheriff’s Office investigators are convinced the right man is in custody. Meanwhile, officials in California are suddenly facing fears that Selas could have preyed on other children during the 37 years that he eluded capture.

“It’s absolutely shocking the level of access that this guy had to children, even now,” said Steve Jurman, supervisory deputy U.S. marshal in San Diego. “If there’s a playbook for pedophiles, he checked off every single box.”

Jurman said Selas had moved to California by 1985 and legally changed his last name to Szeles in 1992. Investigators in Louisiana believe Selas lived in other places—including Chicago; Darien, Connecticut; South Royalton, Vermont; and Sheffield, Massachusetts—after he returned from South America in the early 1980s.

Although no reports of other victims have surfaced outside Louisiana, some see an alarming pattern of behavior that followed the fugitive suspect to the community near the Mexican border where he lived with his wife.

Szeles’ family was in court Wednesday but didn’t speak with reporters. Defense attorney Marc Carlos read a statement from the family describing him as “well-loved, respected and supported by his family and friends and the community here in San Diego.”

The man known as Szeles once served as a Cub Scouts pack leader in Bonita but was removed from the position several years ago for failing to comply with the organization’s “youth protection policies and procedures,” the Boy Scouts of America said in a statement. The statement says a parent had made an unspecified complaint that didn’t relate to scouting.

Szeles also was removed from “all positions related to children” at his Mormon congregation in San Diego for failing to comply with the church’s “child protection policies,” according to Eric Hawkins, a Utah-based spokesman for The Church of Jesus Christ of Latter-day Saints.

“When a parent later expressed a generalized concern about his behavior toward a child, the church urged the parent to report this to authorities,” Hawkins said in an email to The Associated Press.

The Chula Vista Elementary School District is reviewing whether Szeles had connections with any of its 45 schools, which enroll roughly 30,000 students. A flier promoting Szeles Enterprises’ programs for kids said the district was distributing it “as a public service.”

“To have someone with this alleged background literally in our backyard is a concern,” said school district spokesman Anthony Millican.

Selas’ former co-workers at KNOE-TV in north Louisiana remember him as a strange, standoffish man who didn’t fit in at the Monroe-based station, but nobody saw any sinister motives behind his “Mr. Wonder” creation.

Former co-workers said the station owner who hired Selas in 1977 met him on an airplane and offered him a job without checking his credentials, which supposedly included a stint at an Oklahoma television station.

Selas initially worked as a news anchor, but the experiment only lasted a few days. Former KNOE employee Tom Cole said viewers flooded the station with calls to complain about Selas’ high-pitched, awkward delivery of the news.

“He was horrible,” Cole recalls.

But his children’s show was a hit. It started as a weekly program but went daily as its popularity grew.

Often wearing a top hat and tuxedo coat, Selas presided over races and other contests between teams of children bused to the station from local schools. He even served as grand marshal of a Christmas parade.

“All the kids wanted to be on it,” said Gary Miers, who started working at KNOE as a radio disc jockey in 1979.

The popularity of Selas’ on-air persona didn’t extend to his co-workers.

“He was very odd,” Cole said. “Nobody could stand him.”

Cole said the station didn’t sponsor the children’s camping trip that Selas organized in June 1979, but it allowed him to promote it during his show.

Investigators claim Selas sexually abused at least seven children during the camping trip to Kisatchie National Forest in central Louisiana. After parents complained about the alleged abuse, Rapides Parish authorities obtained a warrant for his arrest on two counts of obscene behavior with a juvenile.

He apparently planned other such trips. A flier for “Camping Weekends with Mr. Wonder” said some trips would only be for boys between 5 and 11 years old, but “Mrs. Wonder” would help supervise other co-ed trips.

After he disappeared, Selas’ wife told investigators that her husband fled in a car that later turned up in a Dallas suburb, according to the sheriff’s office.

One of the detectives assigned to the case was William Earl Hilton, now Rapides Parish’s elected sheriff. Hilton recently asked the U.S. Marshals Service to take a fresh look at finding Selas. They found the man known as Szeles in California about two weeks ago.

Frank Szeles lived for years in a well-heeled section of Bonita.

Neighbors said parents frequently took their children to Szeles’ large cul-de-sac house for swimming lessons. Haywood Gammon, who lives next door and knew Szeles and his wife since 1999, said children visited Szeles’ home throughout the summer.

Gammon said his neighbor was friendly and quick to shake hands.

“My main interaction was throwing the plastic balls over the fence” when they strayed off Szeles’ property, he said.

The website for Szeles Enterprises touts the owner’s experience teaching grades one through six overseas, coaching sports, teaching Sunday school and being PTA president at an elementary school less than three miles from his house. The ad, dated 2013, says the activities are for boys ages 5 to 11.

The website says the company’s owner and his wife have four children and nine grandchildren.

Neighbors said they had no suspicions over the years.

“I was very surprised (by the arrest), but it’s not totally out of the question because when you have someone who associates with children a lot you never know,” Gammon said.

No one answered the door at Szeles’ home on Wednesday.

The marshals found a Cub Scouts cap in the suspect’s house when they arrested him without incident Monday. Jurman said Selas acknowledged to authorities that he changed his name. Carlos, the defense attorney, said the allegations were “a shock to everyone.”

He said the family told him other adults were present when Szeles was with children. As for the Mormon church’s decision to remove him from contact with children, Carlos said the allegations couldn’t have been serious enough for the church to notify police.

Rapides Parish investigators believe Darien is Selas’ hometown, but Darien Police Sgt. Jeremiah Marron said he couldn’t find any records related to Selas or any of the other names attributed to him.

“I asked our most veteran officers if they knew anything and the consensus was that they had never heard of him,” Marron wrote in an email.

The man believed to be Selas remains in jail without bail in San Diego. He is due in court Feb. 11 for a hearing to establish his identity. In the meantime, Louisiana authorities are reviving a long-dormant investigation.

The Rapides Parish sheriff said his detectives have spoken to some of Selas’ alleged victims from the 1979 camping trip and they are willing to testify.

“It’s been a long road and it’s not nearly over,” Hilton said.