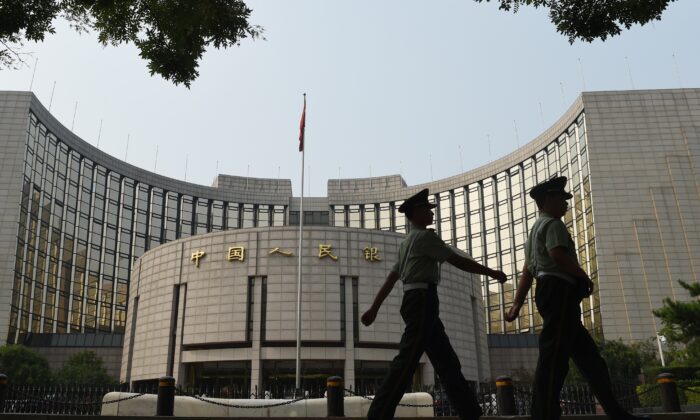 Paramilitary policemen patrol in front of the People's Bank of China in Beijing on July 8, 2015. (Greg Baker/AFP/Getty Images)
Thinking About China

Much has been written about the quantity of U.S. debt held by China. The Chinese regime, however, has also been steadily increasing its own sale of bonds to foreign governments. Currently, $354.11 billion worth of China central government debt is held by foreign governments, individuals, and institutional investors. As of the end of October, Chinese government bonds (CGBs) have been added to the Financial Times Stock Exchange (FTSE) World Government Bond Index (WGBI).

For the past five years, Beijing has raised billions of dollars with an Autumn bond issue in the international bond markets. In September, the Ministry of Finance announced it would issue 8 billion yuan (about $1.24 billion) worth of yuan-denominated treasury bonds in Hong Kong—the first issue of a total of 20 billion yuan of treasury bonds in the city this year. The Shenzhen municipality also issued offshore yuan bonds in Hong Kong, becoming the first local government to do so.

State-run media Global Times said Beijing hoped that these bond issues would increase the internationalization of the yuan. So far, however, the yuan has made little headway in becoming a global currency, only accounting for 1.88 percent of global payments and 1.95 percent of reserves at foreign banks. Additionally, the yuan is only the ninth most frequently traded currency.

According to the Global Times, these bond issues “demonstrate China’s confidence and determination in opening up to the outside world.” The Chinese Communist Party (CCP) also hopes that the bond issues would preserve Hong Kong’s position as an offshore yuan market and an international financial center, in spite of the National Security Law that has threatened Hong Kong’s position as a global financial hub.

A number of issues are dragging on the Chinese economy, including power shortages and supply-chain disruption, as well as increased regulatory scrutiny on the tech, financial, and property sectors. Another bad sign is that China’s fiscal revenue decreased by 2.1 percent in September, compared to the previous year.

The manufacturing purchasing managers’ index (PMI), a measure of the general direction in the manufacturing sector, has been trending steadily down. A score below 50 means that the industry is contracting. In September, China’s PMI was 49.6. So far, in November, the PMI is 49.2.

An additional impediment to the country’s economic growth is the high-profile default risk, associated with property developer China Evergrande Group. This is causing a decrease in confidence in the entire real estate sector, which is now spilling over into real estate-related activities. Cement and steel production have experienced a tremendous contraction, as have property sales and contracts for new construction. Property investment is down, as are property values in most of China’s major cities.

Many China analysts have decreased their China growth forecasts. Oxford Economics, for example, cut its fourth-quarter growth outlook from 5 percent to 3.6 percent, and the 2021 GDP growth from 5.8 percent to 5.4 percent. A further indicator that the world opinion on the Chinese economy has soured is that the cost of credit default swaps, which protects investors against Chinese government dollar-debt default, has reached the highest point since the strict COVID-19 lockdowns in April 2020.

A credit default swap (CDS) is a financial derivative, or contract, that allows an investor to “swap” or offset his or her credit risk—the risk that a bond will default—by buying a CDS contract from another investor. A CDS can involve municipal or corporate bonds, as well as other debt instruments such as emerging market bonds or mortgage-backed securities. The premium paid for the CDS is directly correlated with the likelihood that the bond will default.

The real estate sector, which normally supports China’s economic growth, has been rocked by defaults and increased risk of defaults. Two-thirds of China’s biggest developers have been found to be in violation of China’s “red lines” debt policy, which prohibits companies from maintaining liabilities greater than assets, loan values greater than the value of ordinary shares, or short-term debt greater than liquid cash. A loss of confidence in the real estate sector could adversely affect local governments that depend on land sales for roughly one-fifth of their revenue.

Land sales were down 17.5 percent year-on-year in August, the sharpest fall since the pandemic started. For the period June through October, 40 percent of plots on offer were either withdrawn or had no bidders. With less income from land sales, local governments are incentivized to sell bonds, increasing their indebtedness. In the first three quarters of 2021, local governments issued $347 billion worth of bonds, which is equal to 61 percent of their annual quota.

In October, Beijing pushed $156 billion into the banking system over a period of just two weeks, in an effort to sustain growth. The People’s Bank of China used open-market operations to inject cash into the system, to support corporate tax payments and local debt issuances (local government bonds). The move was done to ensure liquidity, as there are interest and principal payments due from high-yield property issuers.

Moving forward, there is no indication that restrictions on the real estate sector will be lifted. The economy seems to be slowing down, rather than recovering. And it can be expected that both the central and local governments will be issuing more bonds, which will increase China’s public debt that is already more than 300 percent of GDP.