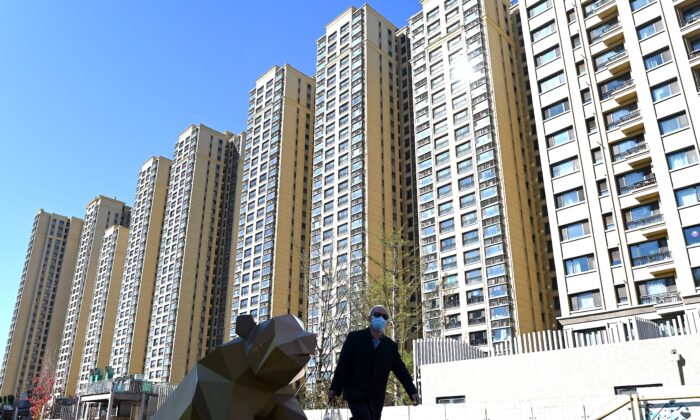 The deepening debt crisis at Chinese developers like Evergrande Group, along with Beijing’s efforts to rein in property speculation, has stifled housing demand and hit the country’s economy.

The output from the real estate sector fell 2.9 percent year-on-year in the fourth quarter, according to a supplemental report from the National Bureau of Statistics (NBS) on the country’s GDP.

The construction sector also saw its output decline by 2.1 percent during the same period. Those two sectors account for 14 percent of China’s national GDP.

China’s property market slowdown has affected developers’ sales, property investments, new construction starts, land purchases, and financing. The problems in December were particularly acute, even after the Chinese regime’s efforts to ease some funding restrictions for the sector in an attempt to stabilize the economy.

“Risks are rising across the Chinese property sector, as evidenced by harsh refinancing conditions for even well-regarded developers,” reported Bloomberg, citing Wei Liang Chang, a macro strategist at DBS Bank.

Guangzhou R&F was downgraded to restricted default last week by Fitch Ratings because of “a distressed debt exchange.” Shimao was demoted to junk status in financial markets by S&P Global, well below the top investment grade it held just a couple of months ago.

China’s central bank unexpectedly cut the borrowing costs of its medium-term loans on Jan. 17 for the first time since April 2020, prompting some analysts to predict more policy easing this year to guard against developers’ mounting risk of default.

“It is difficult for those problematical real estate firms to substantially improve the financing situation, and the pressure on capital turnover may continue to intensify,” said CRIC.

Home sales fell in December for the sixth consecutive month, as the credit crunch in the real estate sector showed minor signs of easing.

December’s combined home sales by value from the top 100 developers plummeted 35 percent compared with that of the same month the previous year, according to CRIC, after falling 38 percent in November.

Beijing’s measures to rein in developer leverage from the third quarter have exacerbated a liquidity crunch at Evergrande, which is now extending to other developers.

Evergrande’s sales plummeted by 37 percent year-on-year in 2021, while Fantasia’s fell by 38 percent, R&F fell by 18 percent, and Shimao and Kaisa both shrank by more than 10 percent.

Land purchases by the top 100 developers contracted by 21.5 percent during 2021, according to the China Index Academy, as cash-strapped developers stayed on the sidelines in a fast-cooling property sector, adding pressure to local governments that rely on land auction sales for income.

China’s overall investment in the property sector rose 4.4 percent in 2021, a further deceleration from 7 percent growth in the prior year, showed NBS data.

Over the last decade, China’s regime has depended on debt to fuel growth, but this has exacerbated financial vulnerabilities.

While Evergrande has emerged as the symbol of the debt-laden system with liabilities of $300 billion at home and abroad, the Chinese property sector as a whole owes an estimated $5 trillion, according to investment bank Nomura, which is roughly equivalent to the entire output of the Japanese economy, the world’s third largest.