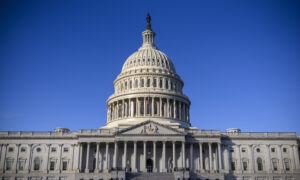 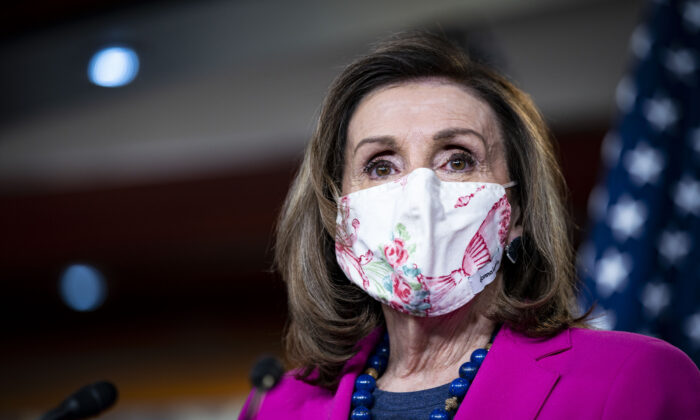 Speaker of the House Nancy Pelosi (D-Calif.) speaks at a weekly news conference at the U.S. Capitol in Washington, D.C., on Feb. 25, 2021. (Al Drago/Getty Images)
Democrats

Debt Ceiling Will Not Be in $3.5 Trillion Budget: Pelosi

Speaker of the House Nancy Pelosi (D-Calif.) said in a press conference today that Democrats will not be adding provisions to increase the debt ceiling to Sen. Sanders’ (I-Vt.) $3.5 trillion budget.

This announcement came as tensions between Democrats and Republicans over raising the debt ceiling have been brewing since the beginning of August. Republicans, unhappy with the spending level of the federal government, have threatened not to vote for an increase to the debt limit if Democrats do not dramatically slow their spending.

In early August, Senate Republicans led by Sen. Ron Johnson (R-Wis.) prepared a new strategy that would force congressional Democrats to take the brunt of the blame for increasing the limit. Forty-six out of the Senate’s 50 Republicans vowed in a petition created by Johnson that they would not vote for an increase to the debt ceiling.

Over 100 House Republicans have since made the same promise.

With this in mind, Pelosi on Tuesday discussed some options for advancing the debt ceiling increase.

Lawmakers have “several options” in the coming weeks, Pelosi said when asked about it Tuesday morning. She did not commit to attaching the ceiling increase to the budget resolution or infrastructure bill, but she implied that this is a live possibility.

Pelosi said then that Democrats would like to raise the limit in a bipartisan way with Republicans. She explained, “we don’t ever want to put the full faith and credit [of the United States] in doubt.”

Under the reconciliation process being used to pass the expansive budget, Democrats in the Senate would be able to pass the legislation without any Republican support. This process would also allow a debt ceiling increase, if added to the bill, to avoid a filibuster in the Senate.

On Wednesday, Pelosi shot down speculation that such a provision would be added to the bill. Democrats “won’t be putting [a debt ceiling raise] in reconciliation,” she said.

This comes as the Treasury warns that it will not be able to fund the government anymore past mid-October at the latest. It has been using “extraordinary measures,” according to Secretary Janet Yellen, to keep government funding stable.

In view of this fast-approaching deadline, Pelosi criticized efforts by Republicans in both chambers to oppose raising the debt ceiling. “The constitution says that the full faith and credit of the United States is not to be in doubt,” Pelosi noted.

She continued, “When Trump was president, we Democrats supported raising the debt ceiling because it was the responsible thing to do.” In total, she added later, Democrats voted to increase the ceiling three times under President Donald Trump, even after what Pelosi called the “Republican tax scam” increased the deficit.

She pointed to past efforts by Republicans to use the debt ceiling to obtain concessions under President Barack Obama; These efforts, she said, “lowered the [United States’] credit rating.”

Democratic leaders have expressed doubt that Republicans will follow through on this effort.

Asked about the situation before the Senate went on their August recess, Senate Majority Leader Chuck Schumer (D-N.Y.) said simply “I can’t believe Republicans will let the nation default.”

President Joe Biden also felt that the effort should be disregarded. When asked whether he was worried about the situation, the president said: “Nope. They’re not going to let us default.” The president continued, “$8 trillion of that is on the Republican’s watch,” referencing the added debt under the Trump administration.

White House press secretary Jen Psaki noted the same day: “Raising the debt limit has been done 80 times … in a bipartisan fashion. Ninety-nine percent of [the debt] existed before President Biden took office.” She added that Republicans would also face pressure from “former leaders from both sides of the aisle [who] are eager to see Congress raise the debt limit and not face default.”