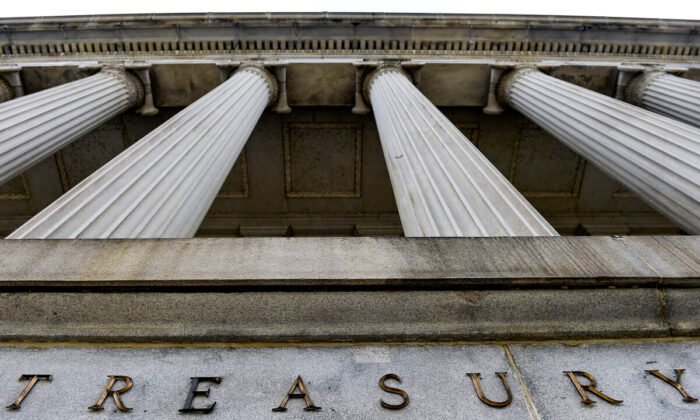 An exterior view of the building of U.S. Department of the Treasury is seen in Washington, on March 27, 2020. (Olivier Douliery/AFP via Getty Images)
Viewpoints

Fears over a technical default have sent Treasury yields higher this week as investors and money managers reduce uncertainty from their portfolios. While the United States has never defaulted on its debts and is unlikely to anytime soon, the recent decline in bond prices and rise in Treasury yields indicates the market believes it is possible.

Due to fears of a technical default, those who hold Treasury bills are starting to raise cash by selling longer-term Treasury notes and bonds. This is similar to the March 2020 liquidity event when the shortage of Treasury bills led to a sell-off in the intermediate and long end of the curve.

Today, the liquidity shortage is in cash as those with Treasury bills are nervous the U.S. Treasury will be unable to make its regularly scheduled coupon and redemption payments since Congress has been unable to pass a spending bill or raise the debt ceiling.

The fear is that by temporarily missing the regular coupon or redemption payment of Treasury bills, those who rely on the liquidity of Treasury bills to fund their operating expenses will not have the cash they need when they’re expecting to have it. To raise cash, corporations, municipalities, and other large holders of Treasury bills who need cash have chosen to sell longer-term Treasury securities.

The cash shortage is manifesting itself in the value of the dollar, which has been rising this past week, validating there is a shortage of dollars. While it’s likely Congress will at least pass a temporary stop-gap budget, those who need cash aren’t willing to take the chance.

The problem is, those who are facing a cash shortage don’t have access to the standing repurchase facility. While the Fed did attempt to reduce selling Treasury securities for cash during liquidity crises, they didn’t mitigate the need to sell them during budget impasses or periods of general uncertainty.