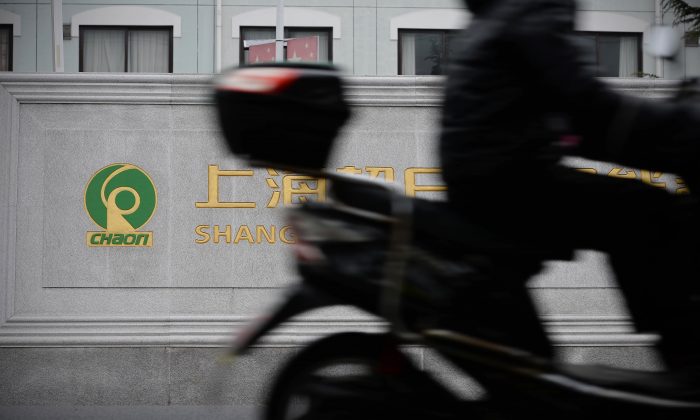 A motorbike rider rides past the gate of the faculties of Chaori Solar Energy Science & Technology Co. in Shanghai on March 8, 2014. Chaori was China's first-ever default on a domestic corporate bond. (STR/AFP/Getty Images)
Business & Economy

With many loans due in the three months, bankruptcies are due to rise
By Valentin Schmid

Up until 2014 the term bankruptcy was unheard of in China. It just wasn’t allowed.

That all changed with the default of an interest payment by Shanghai Chaori Solar Energy Science & Technology in March. Now, about $1 billion worth of junk bond debt is about to go sour within the next three months, according to a report by China Merchants Securities Co.

“The current risks exposed in the private-bond market are probably a prelude to a storm,” Sun Binbin, a Shanghai-based bond analyst at China Merchants told Bloomberg News.

Goldman Sachs goes even further and writes in a note, “The logical conclusion has to be that a non-negligible share of the corporate sector is not able to repay either principal or interest, which qualifies as Ponzi financing.”

Thousands of smaller corporates have participated in China’s junk bond program, which launched in 2012. It’s difficult for these companies to get funding from state owned banks and the authorities want to steer them away from the shadow-banking sector.

These smaller companies are the lynchpin of the Chinese economy, making up over 70 percent GDP.

According the Shanghai and Shenzen stock exchanges, however, the companies did not have to meet any capital or profit requirements to solicit capital from institutional investors.

In consequence, the fundamentals of these companies are shocking and debt exceeds equity by multiples in many cases. Not a problem if the economy is doing well, but China is slowing down noticeably this year.

According to China Merchants, at least four issuers of these junk bonds have faced payment issues in the last few months. The bulk of the 1 billion in loans is due during the next three months.

The Chinese regime previously indicated it would let defaults happen in order to clean out excess debt. “We think more corporate defaults, rising NPLs, nonperforming loans, and some degree of credit crunch will still be unavoidable in the next three years,” states Goldman. And the Chinese regime’s resolve when it comes to bad debt will be put to the test.