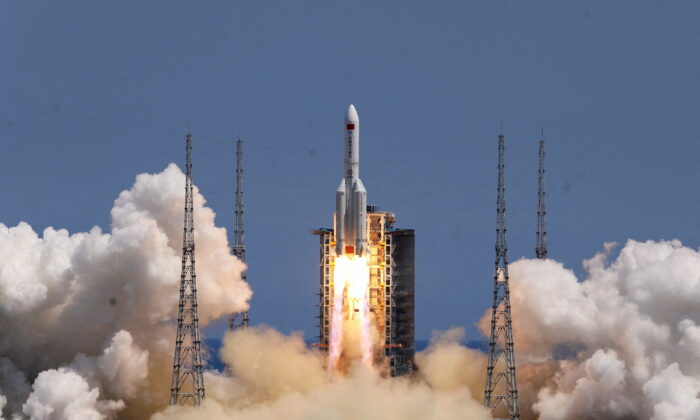 Debris From Chinese Rocket Found in Malaysia and Indonesia

Some fragments of a Chinese rocket that fell back to Earth on Saturday have reportedly been discovered in Malaysia and Indonesia.

The Malaysian Space Agency has confirmed that burnt debris from China’s Long March 5B rocket crossed over Malaysian airspace and was detected in multiple locations in the state of Sarawak, according to local media.

“The rocket debris caught fire while entering the earth’s airspace, and the movement of the burning debris had also crossed the Malaysian airspace and was detected in several areas, including crossing the airspace around the state of Sarawak,” it stated.

The agency later confirmed that preliminary investigations had been launched in the Sarawak provinces of Bintulu and Miri, where debris was found.

“Preliminary investigations show that the first object [in Bintulu], measuring around five inches, does not emit radiation and contains no radioactive elements,” it stated. “The second object [in Miri] also showed the same result.”

Investigations are still ongoing to ascertain whether the two objects are debris from the Chinese rocket launched into space on July 24, and appropriate action will be considered, the agency said.

Over in Indonesia, the National Research and Innovation Agency (BRIN) confirmed Sunday that the Chinese rocket crossed the southern Sumatra airspace and west Kalimantan at its last trajectory.

After CZ-5B r/b reentry over Indonesia at Saturday midnight (local time) ago, many debris possibly related to this space junk was found. 3 debris have been found by local people at Sanggau regency (near Indonesia-Malaysia border). @planet4589@Marco_Langbroek@jremis @cosmos4u pic.twitter.com/wcGUffN14v

“There could be fragments that may scatter along the last trajectory as its orbit passed southern Sumatra,” BRIN senior researcher Thomas Djamaluddin said in a statement.

Jonathan McDowell, an astrophysicist at the Harvard-Smithsonian Center for Astrophysics, claimed that rocket debris fell in Sarawak and Kalimantan, Indonesia, but no casualties or property damage were reported.

“No casualties or property damage reported, but debris is near villages, and a few hundred meters either way could have been a different story,” McDowell said in a Twitter post.

U.S. Space Command confirmed that China’s Long March 5B rocket re-entered Earth over the Indian Ocean on Saturday but referred inquiries about the re-entry’s technical aspects—such as the potential dispersal of debris and the impact location—to China.

Aerospace Corp, a government-funded nonprofit research center near Los Angeles, said it was reckless to allow the Long March’s entire main-core stage to return to Earth in an uncontrolled reentry. The rocket is China’s most powerful and of significant size, weighing 23 tons.

NASA Administrator Bill Nelson also criticized China for not sharing information on the rocket’s descent, stating that doing so is “critical for the responsible use of space” and the safety of humanity.

“All spacefaring nations should follow established best practices and do their part to share this type of information in advance to allow reliable predictions of potential debris impact risk,” Nelson said in a statement.

The Long March 5B blasted off July 24 to deliver a laboratory module to the new Chinese space station under construction in orbit, marking the third flight of China’s most powerful rocket since its maiden launch in 2020.