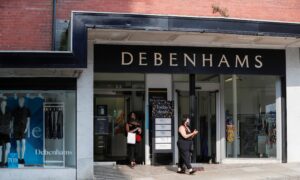 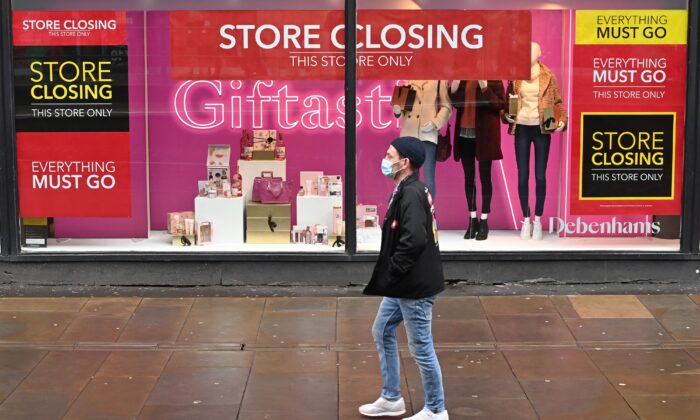 A pedestrian wears a mask as he walks past "Store Closing" signs in the window display of a Debenhams in Manchester, northern England, on Dec. 2, 2020. (Paul Ellis/AFP via Getty Images)
Companies

Debenhams Brand Sold for £55 Million, All Stores to Close

boohoo has paid a cash consideration of £55 million ($75 million) to acquire the global rights to the Debenhams brand, all its in-house brands, and its websites.

The 243-year-old business, which went into liquidation in December 2020 due to the impact of the CCP virus pandemic, will see its remaining 118 stores closed permanently, and up to 12,000 jobs lost once the liquidation sale is finished.

The UK’s four nations are currently under another round of stringent lockdowns, under which businesses deemed non-essential are not allowed to open.

“Once Debenhams stores are able to reopen and the stock liquidation can continue in stores, the website will be operated by boohoo,” Debenhams’ administrators said in a statement.

“The closing down sale will continue in stores for several weeks until the stock liquidation is completed and the value of this stock will be retained for creditors. Regrettably, all the UK stores will then be permanently closed.”

Debenhams’ Danish subsidiary, Magasin du Nord, is not affected by this transaction.

Geoff Rowley, joint administrator and partner of FRP Advisory, said the administrators are pleased with the deal.

“We are pleased to have secured the future for this great brand, and to have created the opportunity for a new Debenhams-branded business to emerge in a different shape beyond the pandemic,” Rowley said.

“I expect that the agreement with boohoo may provide some job opportunities but we regret that this outcome does not safeguard the jobs of Debenhams’ employees beyond the winding down period,” he said.

In April 2020, Debenhams UK went into administration for the second time in a year, seeking to protect itself from legal action by creditors during the crisis that could have pushed it into liquidation.

It shedded hundreds of jobs in May, and 2,500 more in August 2020, among the tens of thousands of jobs evaporated after a national lockdown in England was imposed from March to July in order to curb the spread of the CCP virus.

On Dec. 1, 2020, FRP announced that Debenhams were to be liquidated after failed attempts to find a buyer, partly due to market uncertainties caused by the pandemic.

Debenhams’ operation in Ireland had also gone into liquidation in April 2020.

A KPMG report published on Jan. 14 said that UK could lose nearly 400,000 jobs and up to 40 percent of their retail offerings as consumers shift to online shopping due to the impact of the pandemic.

Alexander Zhang, Xiaofei Chen, and Reuters contributed to this report.