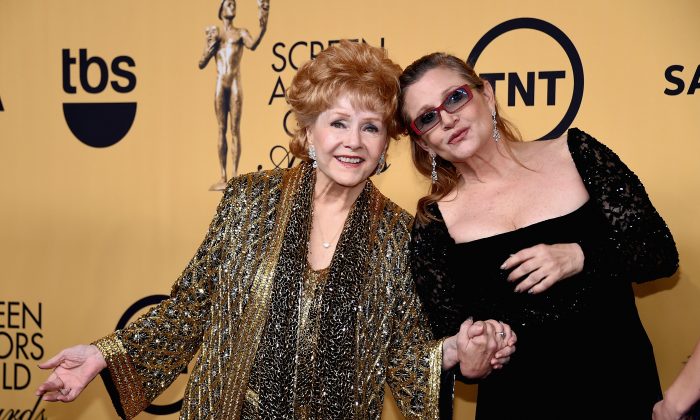 LOS ANGELES—Debbie Reynolds died of a stroke and her daughter Carrie Fisher died of cardiac arrest, according to their death certificates.

The Los Angeles County Department of Public Health issued Reynolds’ death certificate in the name of Mary Frances Reynolds. It was obtained Tuesday by The Associated Press.

Under “cause of death” it says “intracerebral hemorrhage,” a type of stroke caused by bleeding in the brain rather than the more common type caused by a clot. The certificate lists high blood pressure as an underlying cause.

Reynolds died at 84 on Dec. 28 at Cedars-Sinai Medical Center, the certificate says.

The death certificate lists Reynolds’ son Todd Fisher as the notifying party, and says Reynolds had been in the entertainment business for 68 years.

Reynolds suffered a medical emergency while making memorial plans for Fisher, who died a day earlier.

Fisher’s death certificate, obtained Monday, lists the cause of death as “cardiac arrest/deferred.” The “deferred” designation indicates that more investigation is needed by the coroner, usually in the form of toxicology tests that can take several weeks to complete.

The certificate says Fisher had been in the entertainment business for 46 years.

Fisher had a medical emergency on a flight from London to Los Angeles on Dec. 23. She died at 60 on Dec. 27 at Ronald Reagan UCLA Medical Center, the certificate says.

Fisher, best known for her role in the “Star Wars” saga, and Reynolds, who starred in “Singin’ in the Rain,” were mourned in a joint memorial at their neighboring homes on Thursday and had a joint funeral at a Hollywood Hills cemetery the next day.

Relatives have said they are planning a public memorial.