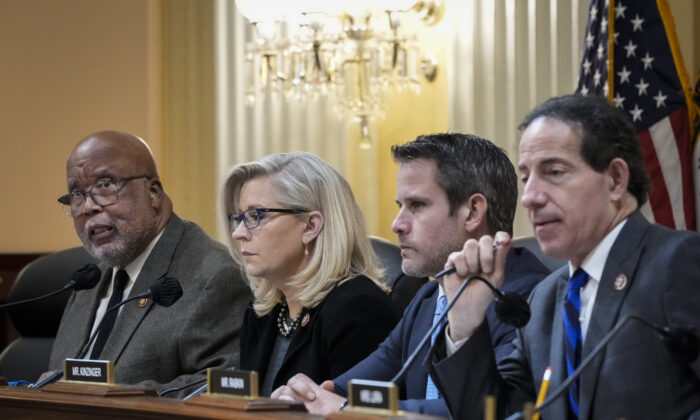 "It could be taken as witness tampering. I’m very concerned about it.”
By Joseph M. Hanneman

The Jan. 6 committee’s announcement that it has cleared Ray Epps of being an FBI informant during the unrest at the U.S. Capitol on Jan. 6, 2021, is an effort to “manipulate public opinion rather than collect facts,” an attorney representing a Jan. 6 defendant said on Jan. 12.

The Select Committee to Investigate the January 6th Attack on the United States Capitol announced on Twitter that it had met with Epps, who “informed us that he was not employed by, working with, or acting at the direction of any law enforcement agency on Jan 5th or 6th or at any other time.”

That announcement came shortly after Sen. Ted Cruz (R-Texas) grilled a senior FBI official during a Senate Judiciary Committee meeting about Epps and whether the agency had any undercover assets working at the Capitol on Jan. 6, 2021. It also came a day before Epps’s attorney, John Blischak, told The Epoch Times that the FBI had met with Epps in Arizona. Blischak also said his client isn’t an FBI informant.

The developments did little to dispel online debate over the possible use of government agents or assets during the unrest at the Capitol on Jan. 6. An attorney who represents a Jan. 6 defendant said he was very surprised that the committee made such a public comment regarding Epps.

“I think they obviously were responding to Ted Cruz,” Jonathon Moseley, an attorney representing defendant Kelly Meggs, told The Epoch Times. “I also believe that the whole behavior, including that, makes it look like they are acting like a super PAC for Democrat reelection. It could be taken as witness tampering. I’m very concerned about it.”

Moseley has subpoenaed Epps to appear in court in April in the Meggs case.

“I think it’s very extraordinary that they would comment at all, given the nature of what they’re supposed to be doing,” Moseley said. “They’re not supposed to be commenting on the witnesses and influencing it. It really reveals the partisan nature of what they’re doing, that they went out of their way to influence the public discussion instead of just gathering data and issuing a report.”

Moseley said the Jan. 6 committee’s “gratuitous defense” of Epps set off a flurry of phone calls between attorneys who represent Jan. 6 defendants.

“I’ve subpoenaed Ray Epps. It really does affect my case in terms of witness tampering—the very thing they’ve accused of other people,” Moseley said. “I’m focusing on the unnecessary nature of the comment. That’s what really makes it stand out. It’s very strange.”

A message left by The Epoch Times with a spokesman for the select committee wasn’t returned.

Speculation about Epps took on a life of its own after media website Revolver ran two extensive articles on Epps, with videos showing him recruiting people to go into the Capitol after then-President Donald Trump finished his rally speech on Jan. 6, 2021.

Epps was also seen in video footage at the site of the first breach of police lines at the Capitol just before 1 p.m., in which he whispers to a young man mere seconds before the man pushes over a police barrier.

Epps’s photograph was initially on the FBI’s Jan. 6 most-wanted list in early 2021, but by mid-year, the photo had been scrubbed from the FBI website. Epps hasn’t been charged with being at the Capitol or inciting others to go into the Capitol.

Rep. Adam Kinzinger (R-Ill.), a member of the select committee, took to Twitter to taunt his colleagues who questioned if Epps was acting as an FBI informant or government asset.

He posted at Rep. Thomas Massie (R-Ky.): “Is Ray Epps a fed? It’s a HUGE accusation so please just yes or no. Not interested in circular reasoning, ‘just asking questions,’ etc. Just, is Ray Epps a fed? Let’s get you on record please.”

Massie had questioned Attorney General Merrick Garland about Epps at a public hearing in October 2021.

“How many agents or assets of the federal government were present on Jan. 6, whether they agitated to go into the Capitol, and if any of them did?” Massie had asked.

Garland replied, “I’m not going to comment on an investigation that’s ongoing.”

To Cruz, Kinzinger wrote: “Simple question for ya. Is Ray Epps a fed? It’s time for you to account for your own opinion since you have lit the fire. Ted what say you?”

Being at a protest is not illegal. Going into the capitol is. It’s that simple https://t.co/6ULiIbP8CC

Cruz said the Department of Justice and the FBI owe Americans honest answers regarding Jan. 6, 2021.

“Under [President] Joe Biden, we have seen an incredibly partisan Department of Justice. Both the Department of Justice and the FBI have an arrogance that they’re not accountable to anyone, that they can stonewall,” Cruz told Fox News. “It should be very easy for the FBI to say, ‘No, no federal agents participated in violent crime. No, no federal agents actively incited, encouraged others to commit violent crimes.’ If they were doing their jobs, those would be very easy questions to answer.

“There needs to be transparency. The Biden administration needs to ‘fess up. Is this a politicized law enforcement operation that is targeting the enemies of the president, and did they actively encourage and solicit illegal conduct?”