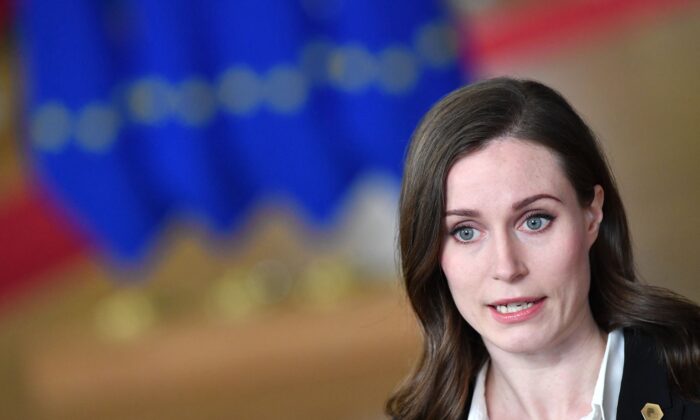 Debate on NATO Membership ‘Will Change’ After Russian Invasion of Ukraine: Finnish Official

The debate over whether Finland should join the North Atlantic Treaty Organization has shifted following Russian forces invading Ukraine, a top Finnish official said on Feb. 24.

“Finland is not currently facing an immediate military threat, but it is also now clear that the debate on NATO membership in Finland will change,” Prime Minister Sanna Marin told a press conference Finnish broadcaster YLE reported.

Finland is part of the European Union but not NATO, a bloc of 30 countries primarily in Europe. Sweden is in the same situation. They are two of just six union members who aren’t part of the bloc.

The proposal to join NATO would require support from the public and Parliament, according to Marin.

Supporters in Finland of joining NATO argue it would help guarantee protection against Russia, according to the Wilson Center. Opponents say joining NATO would impose a financial burden and require providing military support to NATO operations.

Swedes who want to join NATO are also wary of Russia while those against NATO membership say joining could trigger a backlash from Russia.

Leaders of both countries condemned Russia’s invasion as they joined an emergency European Union summit in Brussels on the matter.

Swedish Prime Minister Magdalena Andersson told reporters that the country is not joining NATO for the time being despite Russia’s actions.

“In a situation like this it is important that Sweden’s long-standing security policy stays firm. That we are predictable and clear,” Andersson said, according to AFP. “Sweden has been alliance-free for an extremely long time. It has served Sweden’s interests well.”

Russian officials have opposed any new countries, including Ukraine, joining NATO, and became upset when NATO didn’t rule out accepting Ukraine or other prospective members.

Because Ukraine didn’t become a member, NATO members are not obligated to send troops to help battle Russian forces. NATO’s founding charter says an attack on one country is considered an attack on all members of the alliance.

Sergiy Korsunky, a Ukrainian diplomat to Japan, told a briefing in Tokyo that the war would not have happened if Ukraine had gained NATO membership.

“For NATO now, we want the membership,” he said, adding later that “we believe that there is no country in the world which can protect itself by itself.”

James Heappey, the British armed forces minister, said in parliament around the same time that neither British nor NATO troops should “play an active role in Ukraine” because that could cause an unnecessary escalation.