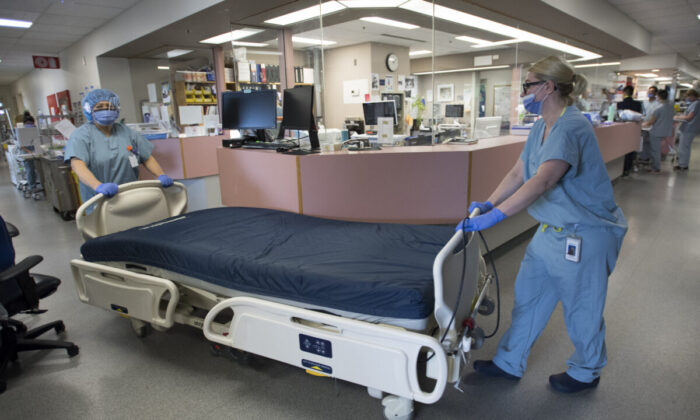 A bed in need of cleaning is moved in the COVID-19 intensive care unit at St. Paul’s hospital in downtown Vancouver, Canada, on April 21, 2020. (Jonathan Hayward/The Canadian Press)
Canada

More and more people are dying while on wait lists for medical treatments in Ontario, but the province’s latest health data shows that the situation took a turn for the worse during the COVID-19 pandemic, a think tank says.

Released on Aug. 15, an analysis conducted by SecondStreet.org says that the Ontario Health Data shows a spike in the number of patients that died while awaiting surgery, CT scans, and MRI scans in 2021-22.

The institute conducts research into government policies and shares how those policies impact Canadians in their daily lives. It obtained the health data through freedom of information requests.

“The freedom of information response shows that waiting list deaths for the aforementioned health services are up significantly over the past five years,” the think tank says.

In an email reply in late July, Ontario Health provided the institute with data showing 1,417 patients have died while waiting for surgery between Jan. 4, 2021, and March 31 this year—a 43.7 percent increase over the pre-pandemic numbers at 986 in 2019-20.

SecondStreet.org said the health agency won’t disclose details of which surgeries the patients were waiting for when they died.

“Ontario Health has refused to release similar information, citing patient confidentiality as rationale,” the think tank said, adding it has filed a complaint with the Information and Privacy Commissioner of Ontario “to try to obtain additional details.”

In response to the institute’s request for the detailed breakdown, an email from Ontario Health on Sept. 8, 2021, said the agency can only provide “aggregate numbers” by fiscal year.

“In our email dated July 20, 2021, we clarified that Ontario Health is able to provide you with aggregate numbers for the number of patients who died on a waiting list for surgery or a diagnostic scan broken out by fiscal year beginning with fiscal year 2010-2011 up to fiscal year 2020-2021,” the email stated.

SecondStreet.org countered, saying health agencies in other provinces are able to do so.

“Provinces like Nova Scotia and Alberta can provide more details … why can’t Ontario?” the institute said in a tweet on Aug. 15. “Surely someone must have looked into this growing trend?”

In its latest email to SecondStreet.org on July 21, Ontario Health said the data provided was not indicative that the surgeries or diagnostics tests were meant “to be life-saving.”

“Mortality is impacted by many complex and interrelated clinical, socioeconomic and cultural factors,” the agency said.

“The above surgical statistics do not indicate the procedures were intended to be life-saving, nor that patients passed away as a result of an extended waitlist for a surgical procedure.”

SecondStreet.org President Colin Craig says “government rationing and mismanagement in health care are costing some patients their lives and many others their quality of life in their final years.”

“Decades of throwing more and more money at the health care system hasn’t worked. The Ontario Health data shows that waiting list deaths were a growing problem before the pandemic began,” he said in a statement.

“How many of these patients died for procedures which could have potentially saved their lives? How many spent their final years waiting in chronic pain while waiting for procedures like hip operations and knee operations? How many developed depression or mental health issues due to their long wait for care?” he asked.

“These are important answers to find out.”