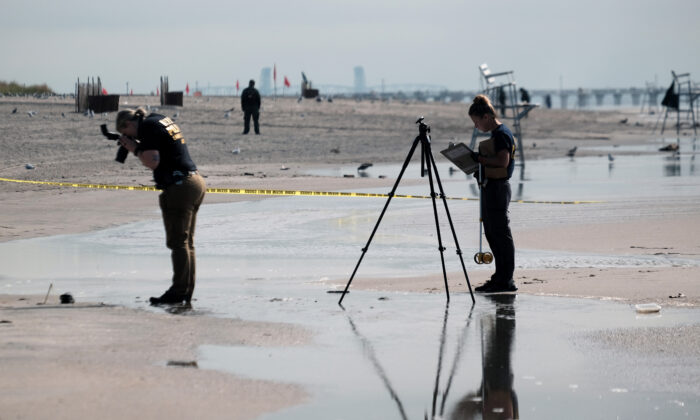 Police work along a stretch of beach at Coney Island which is now a crime scene after a mother is suspected of drowning her children in the ocean in the Brooklyn borough of N.Y., on Sept. 12, 2022. (Spencer Platt/Getty Images)
Crime and Incidents

The drowning deaths of three children who were found unconscious early on Monday along the shoreline of New York’s Coney Island have been ruled homicides, the city’s medical examiner’s office announced on Tuesday.

The bodies of three children, identified by police as Zachary Merdy, 7, Lilana Merdy, 4, and 3-month-old Oliver Bondarev, were found after an hour-long search prompted by a worried relative who notified police that the child’s mother could harm her children.

Authorities since detained the mother, identified by family members as 30-year-old Erin Merdy. She is suspected of drowning the three children and has been hospitalized for psychiatric evaluation.

Since Wednesday morning, Merdy hasn’t been charged in relation to the crime, police said. Detectives have tried to question her at the local police precinct house.

According to surveillance footage, Merdy was seen walking from her home with the children just after midnight, the New York Post reported. She was captured entering the boardwalk area of the beach around 12:50 a.m. holding Oliver, while Zachary and Lillyana walked beside her.

Sources told the newspaper that Merdy was caught on video again about 45 minutes later near West 8th Street and Riegelmann Boardwalk West without her three children.

The woman had reportedly been battling mental health illnesses, including bipolar schizophrenia, at the time of the triple slaying, relatives and police sources told the New York Post.

Derrick Merdy, a Navy veteran and the father of Zachary, told The New York Times that he was locked in a custody battle with his ex-wife over his 7-year-old son when the killings occurred.

The grieving father said he’d been fighting for custody of Zachary ever since they divorced in 2015. He noted that often when he picked up his son for visits, he was unwashed, hungry, and didn’t have sufficient clothing.

“I was trying to get my son. Now that’s not going to happen,” a sobbing Derrick said, adding that Zachary told him about a year ago that his mother “makes me starve.”

Early on Monday, authorities intensified the search for the three children after the mother was found alone wandering Coney Island’s boardwalk.

The bodies of the three children were found at the water’s edge shortly after 4:30 a.m. on a quiet section of the beach about 13 blocks from the stadium where the Brooklyn Cyclones minor league baseball team plays.

Efforts to revive the children at a nearby hospital failed, NYPD’s Corey said.

Merdy’s mother, Jacqueline Scott, 56, told New York Daily News that her daughter “might have been going through postpartum depression.” She added that Merdy is “a loving mother” but was going through a rough time.

Scott also told the newspaper that she tried to talk to her daughter over the weekend.

“I reached out to her yesterday and she said she was doing laundry and I said I wanted to speak to the kids,” Scott said. “I tried to call her twice on the phone after that and there was no answer.”

The children’s bodies were found three blocks from Merdy’s apartment building, where police had first gone when the search began. Corey said officers had canvassed the beach and the boardwalk, searched neighborhood streets, and checked the local hospital in the hunt for the children before the mother was found on the boardwalk.

According to court documents cited by Daily News, Merdy was behind on rent and was facing potential eviction from the apartment where she lived with her children.