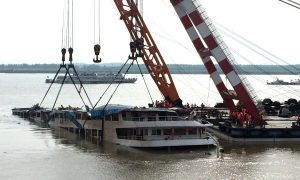 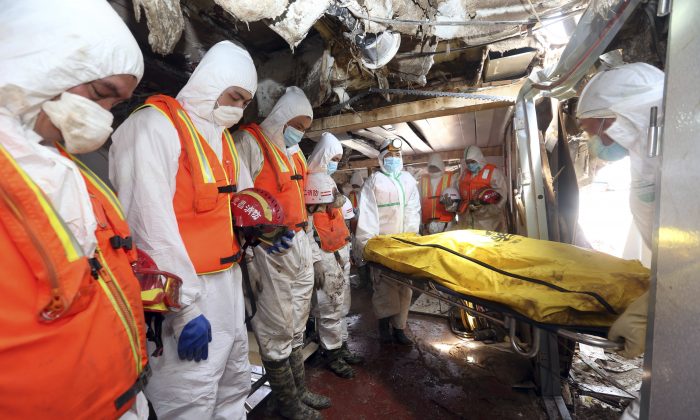 Rescue workers react as a body is removed from the Eastern Star after it was righted and lifted by cranes in the Yangtze River in Jianli county in southern China's Hubei province, June 6, 2015. The death toll rose after hundreds of more bodies from the Eastern Star were found including that of a 3-year-old girl in the top deck, officials said. (Chinatopix Via AP)
China

Authorities have attributed the overturning of the cruise ship late Monday to sudden, severe winds, but also have placed the captain and his first engineer in police custody.

Passengers’ relatives have raised questions about whether the ship should have continued its voyage after the storm started in a section of Hubei province and despite a weather warning earlier in the evening.

The death toll rose to 406 overnight after hundreds of bodies from the Eastern Star were found Friday and Saturday, including that of a 3-year-old girl in the top deck, officials said. Another 36 people were listed as missing, CCTV reported, citing rescue authorities.

Hu Kaihong, the vice director-general of the press bureau of the State Council Information Office, told a news conference that authorities had requested that river traffic and others along the river to alert them if they noticed any floating bodies.

Hu said authorities were increasing their efforts to search for the missing and had expanded the target area from the middle reaches of the Yangtze more than 600 miles downstream to Shanghai.

The boat had more than 450 people aboard, many of them elderly tourists, for a cruise from Nanjing to the southwestern city of Chongqing.

Fourteen people survived, including three pulled out by divers from air pockets in the overturned hull on Tuesday.

Disaster teams put chains around the hull and used cranes to roll the banged-up, white and blue boat upright and then gradually lift it out of the gray currents of the Yangtze on Friday.

Forensic teams are using DNA matching to identify the remains, but haven’t said how long the process would take.

On Saturday night, relatives were taken by bus to an area just upriver of the now-righted ship, where they burned incense and tossed flowers into the Yangtze in memory of the dead.

The Eastern Star disaster became the country’s worst since the sinking of the SS Kiangya off Shanghai in 1948, which is believed to have killed anywhere from 2,750 to nearly 4,000 people.

China’s deadliest maritime disaster in recent decades was the Dashun ferry, which caught fire and capsized off Shandong province in November 1999, killing about 280 people.

Meanwhile, a TV station, Jiangsu Satellite, canceled the popular dating show “If You Are the One” and the rest of its entertainment shows on Saturday for three days because it was “in deep mourning,” it said.