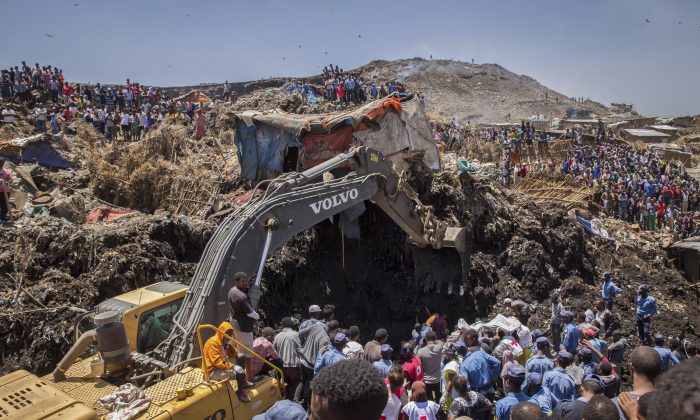 Rescuers work at the scene of a garbage landslide, on the outskirts of the capital Addis Ababa, in Ethiopia on March 12, 2017. (AP Photo/Mulugeta Ayene)
International

ADDIS ABABA, Ethiopia—The death toll has reached 50 from the collapse of a mountain of trash at a massive garbage dump on the outskirts of Ethiopia’s capital, officials said Monday, as relatives waited for news of the dozens said to be missing.

It was not clear what caused Saturday night’s collapse, though residents have said the dumping of trash had resumed there in recent months after protests at a newer landfill site.

Weeping mourners clutching photos of the dead lined the narrow roads around the Koshe landfill as police tried to block people from entering, while rescue and recovery work continued. Most of the dead are women and children.

Hundreds of waste-pickers work at the landfill every day, and others find cheap housing there. Many of the mud-and-stick houses were buried under the rubble, and about 54 people so far have received medical treatment, said Solomon Bussa, the chief of clinical services at the Alert Hospital where the injured have been taken.

One survivor, Mulate Debebe, told The Associated Press she had been bathing her two children Saturday evening at their home inside the landfill when disaster struck.

“First I heard a loud and scary sound outside, so I told my husband to go outside and check what that was,” she said from a hospital bed. “Then the sound gets bigger and bigger so I tried to move out quickly, but I was caught up in the middle of the rubble. The next thing I know was that I was in this hospital’s bed.

“Now I don’t know the fate of my children and my husband.”

Covering her face to hide her tears, she said she makes a living selling candles at a nearby church with her disabled husband.

“I lived at that place for the past 11 years and I’ve never seen anything like this,” Mulate said of the landfill. “My legs are badly hurt. I’m not sure I will ever walk again. And now I’m being told by nurses at this hospital to evacuate the emergency room. I don’t where to go next.”

An Addis Ababa city official, Dagmawit Moges, said a private funeral for some of the dead would be held later Monday.

The landfill has been a dumping ground for the capital’s garbage for more than 50 years. Smaller collapses have occurred at Koshe—or “dirty” in the local Amharic language—in the past two years but only two or three people were killed, residents said.

Addis Ababa’s mayor has vowed to relocate those living at the landfill, which officials say receives close to 300,000 tons of waste collected each year from the capital.