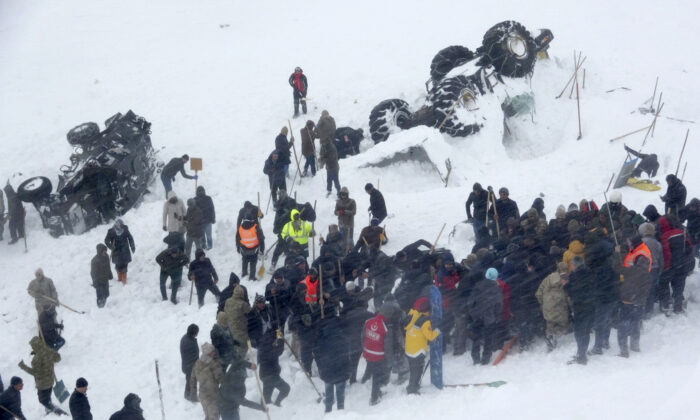 Emergency service members work in the snow around overturned vehicles, near the town of Bahcesaray, Van province, eastern Turkey, on Feb. 5, 2020. (Yilmaz Sonmez/IHA via AP)
Europe

ISTANBUL—The death toll from a pair of avalanches in eastern Turkey climbed to 41 Thursday, Turkey’s disaster and emergency agency said as search teams aided by sniffer dogs scanned the avalanche field for bodies.

The first avalanche late Tuesday killed five people in eastern Van province, which borders Iran. After about 300 emergency service workers were called to respond, a second avalanche struck the large rescue team near the town of Bahcesaray on Wednesday.

A ceremony was held for 11 military police officers, nine government-paid village guards and two firefighters in Van who were killed by the avalanches. Their coffins were sent to their hometowns for burial.

AFAD said controlled explosions were set off to trigger less-destructive avalanches. It said 180 personnel were working in the area.