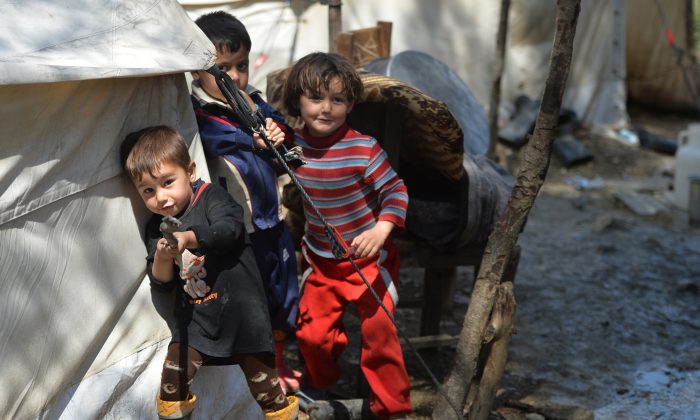 Syrian children are seen at a make-shift refugee camp some kilometers away from the Syria-Turkey border. Thousands of children are confirmed to have died in the fighting in Syria since last summer (Miguael Medina /AFP/Getty Images)
Middle East

The death toll in Syria has topped 93,000 since the start of the conflict, according to the U.N.

The latest U.N. analysis of the impact of the conflict shows that since July, an average of over 5,000 have been killed each month.

“This extremely high rate of killings, month after month, reflects the drastically deteriorating pattern of the conflict over the past year,” Navi Pillay, U.N. High Commissioner for Human Rights, said in a statement.

The report was based on data from eight sources, including the Syrian government and the Syrian Observatory for Human Rights based in the U.K. Only if the name of the victim and date and location of death were known would the death be counted.

The information did not distinguish deaths of combatants from those of non-combatants, and the age of three-quarters of those killed was unknown.

Related discussion: Should the U.S. arm the Syrian opposition?

However, Pillay said that the killings of at least 6,561 minors, including at least 1,729 children under ten years old, had been documented. “There are also well-documented cases of individual children being tortured and executed, and entire families, including babies, being massacred – which, along with this devastatingly high death toll, is a terrible reminder of just how vicious this conflict has become.”

He called for a ceasefire from both sides and said that other states could do more to end the conflict.  “The only answer is a negotiated political solution. Tragically, shamefully, nothing will restore the 93,000 or more individual lives already lost.”