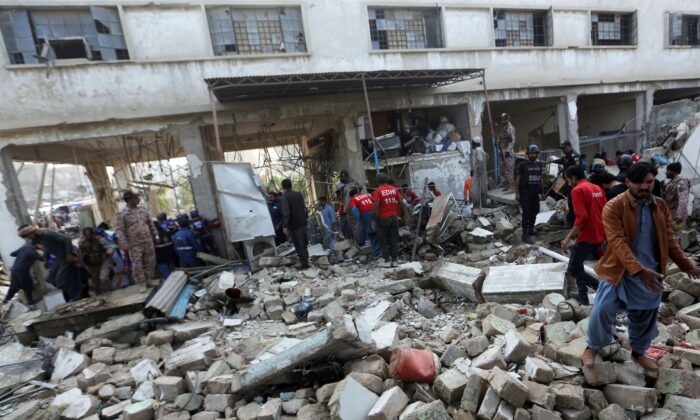 Initially, 12 people were reported dead and 11 others injured in Saturday’s gas explosion in a sewage system in the commercial hub of Pakistan Saturday.

Senior police officer Sarfaraz Nawaz Shaikh said the loss of lives and property could be blamed on human errors of construction over the sewer. He said the number of injured also increased to 16.

The blast destroyed the HBL bank building constructed over the sewer. The building was one of several ordered to vacate after violating building laws, according to Mukhtar Abro, a local administrator, who said the structures were to be demolished in coming weeks.

Many sewage channels in the city have been covered, mostly illegally, by constructing concrete structures over them.

Also Sunday, a roadside bomb killed two and wounded three others in a passing vehicle in the country’s northwest. Police officer Abdus Samad said the vehicle was destroyed in the blast, in Khyber Pakhtunkhwa province. A search operation has started to trace the culprits who planted the bomb. No one claimed responsibility for the blast near the border of Afghanistan.

In the same province Sunday, two people were killed and six others wounded when a group of gunmen opened fire in the Karak district. Police official Akbar Khan said the violence took place at a polling station during a local government election. Other minor clashes were reported linked to the vote but without any casualties.