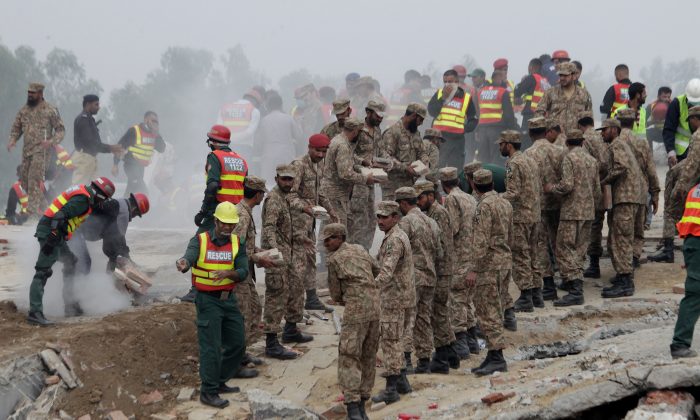 LAHORE, Pakistan—The death toll from the collapse of a four-story factory building in eastern Pakistan rose to 20 on Thursday, as rescuers with cranes and construction equipment continued digging for survivors, officials said.

More than 200 workers were believed to be inside the building on the outskirts of Lahore when it collapsed overnight Wednesday. Rescuers had pulled 102 people from the rubble alive and dozens of experts from the army and hundreds of civilians were looking for those who remain missing, said Jam Sajjad Hussain, a spokesman from the state rescue agency.

“The building collapsed more than 24 hours ago and we have a hope to find more survivors,” he told The Associated Press.

The building had been under construction and emergency teams were carefully removing concrete and piles of bricks, Hussain said.

However, some of the relatives of workers believed to be trapped were pressuring the government to speed up the rescue operation.

The cause of the collapse is yet to be determined. It happened just over a week after a magnitude-7.5 earthquake hit Pakistan, killing 273 people and damaging nearly 75,000 homes.