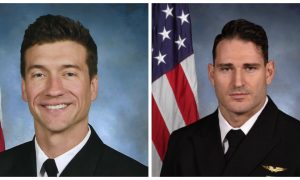 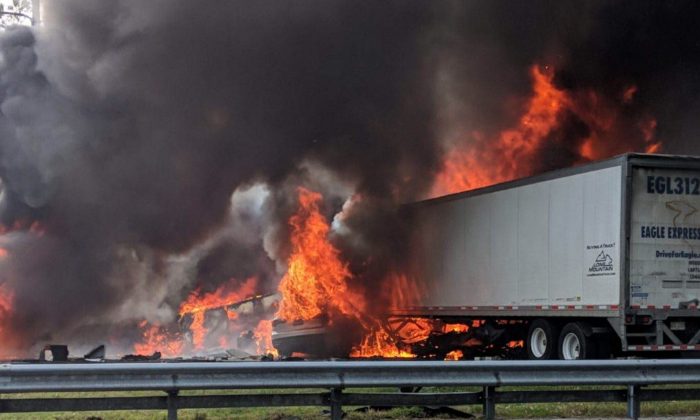 Flames engulf vehicles after a fiery crash along Interstate 75 about a mile south of Alachua, near Gainesville, Florida, on Jan. 3, 2019. (WGFL-Gainesville via AP)
Crime and Incidents

The number of people killed in a crash in Florida has risen to seven, with several children among the deceased, according to reports.

Two big rigs and two vehicles collided on Jan. 3, spilling fuel across a highway, and sparking a massive fire.

About 50 gallons of diesel were spilled across Interstate 75 near Gainesville in Florida, authorities said, as two tractor-trailer rigs, a passenger van, and a mid-sized sedan crashed around 3.30 p.m.

Several people were transported to a nearby hospital suffering critical injuries, according to the Gainesville Sun.

Initially, six people were reported to have died, but authorities increased this to seven late on Thursday, Jan. 3.

Lieutenant Patrick Riordan from the Florida Highway Patrol told ABC Action News that several of the seven dead were children, but he didn’t have exact numbers at this time.

Emergency responders said the crash was being treated as a homicide, but they didn’t elaborate on the reasons why.

Lieutenant Riordan told The Associated Press that their top priorities were to conduct a thorough investigation and to identify the deceased victims.

“There’s going to be families that need to be notified that their loves ones have perished,” said Lieutenant Patrick Riordan.

Riordan said he didn’t know whether the victims were killed by the force of the crash or if they had burned in the fire, making identifying them difficult.

He said five of the victims had been traveling in the passenger van, with others from the van hospitalized but he didn’t know how many.

The fire was so intense that it burned into the road. Emergency crews were able to bring it under control and extinguish it.

Nicole Towarek, a student at Western University student in Ontario, told the Gainesville Sun that the heat was “insane.”

“We kept seeing these little explosions and fire,” she said.

Debris from the crash was strewn across the road, Florida Highway Patrol said, with the highway closed in both directions in the aftermath of the crash.

“There are engine parts and components, and there is a lot of area that is burned,” Riordan told the Gainesville Sun. “Contamination of fuel is a high probability at this point.”

A tweet from the Alachua County Sherriff’s office called for “all hands on deck” to deal with the emergency. They wrote that the crash was in the northbound lanes but that the southbound lanes were closed to keep a route open for first responders.

“Unfortunately, this is a mass casualty crash with fire and an extensive scene. The crash is in the NB lanes. We needed to keep a route for first responders open. We apologize for delays in the commute. This required all hands on deck. The closure is going to be lengthy,” said the office.

Fearing there may have been victims in the woods close to the highway, a helicopter was called in to assist with the search.

Other details about the incident were not released by police or fire officials.