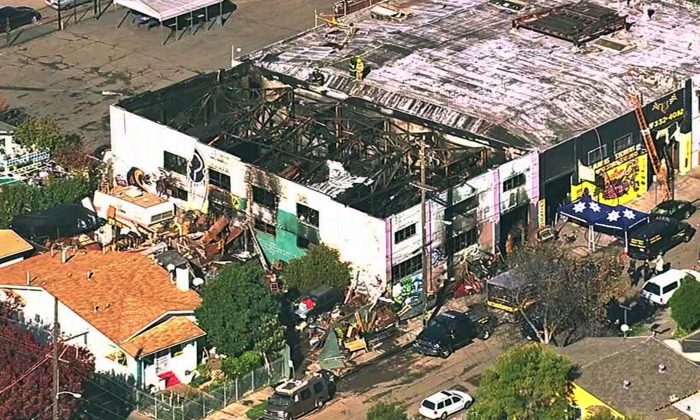 The Ghost Ship Warehouse after a fire that started late Friday swept through the Oakland, Calif., building. Dozens of people are confirmed dead with the toll expected to rise. (KGO-TV via AP)
US

OAKLAND, Calif.—The death toll in the Oakland warehouse fire has grown to 36 and authorities say they expect the number to rise when they resume work later Monday following a temporary work stoppage. A wall is leaning inward, posing a safety hazard to those who have been searching the building which erupted in fire Friday night.

Eleven of the victims have been positively identified, but the names have yet to be publicly released.

Authorities also believe they’ve located the section of the building where the fire started, but the cause remains unknown.

The fire erupted during a dance party late Friday night.

Survivors and teary-eyed friends of those who perished viewed the charred building from a distance, have placed flowers on several small memorials and embraced each other to mourn their losses.

Bouquets of sunflowers, single white roses, lilies and carnations were stuck in chain-link fences, votive candles burned on sidewalks and post-it notes paid tribute to the missing and the dead in the most lethal building fire in the U.S. in more than a decade.

Kai Thomas and a group of red-eyed classmates from an arts high school in San Francisco pressed against police tape Sunday near the street corner where the “Ghost Ship,” a warehouse converted to artist studios and illegal living spaces, rapidly went up in flames late Friday, taking the life of a friend.

Three of the boys had been in the cramped and dark building, Thomas said, but one got separated from them 30 seconds before someone yelled, “Fire.”

“It was just really smoky and hard to see,” said Thomas, a high school junior who wasn’t there, but recounted what he had been told by two others who didn’t want to speak. “They jumped off the second-floor balcony and ran out.”

The boys waited for their 17-year-old friend for more than three hours, but he never emerged.

They wouldn’t give his name, but the victims included a 17-year-old, as well as people from Europe and Asia and some over 30, said Alameda County Sheriff’s Sgt. Ray Kelly said. Officials had identified eight of the dead — at least seven of them using fingerprints, but told family members of the missing that they may need to use DNA for more difficult identifications.

“When we started this investigation, if you had told us that you would have 33 victims, we wouldn’t have believed you,” Kelly said. “I don’t know how many people are left in there.”

Lists of the missing circulated and many of those who had been unable to reach friends in the past two days had given up hope when authorities said people either escaped without injury or died inside.

Jesse James Alexander, a DJ, who wasn’t at the party, showed up at the scene of the fire Sunday to remember three friends who were killed, though he didn’t want to give their names.

Others were still holding out hope. Yuri Kundin said outside a sheriff’s office where friends and family gathered for word of their loved ones that he was hoping for good news about his friends, Alex Ghassan and Hanna Henriikka Ruax, who was from Finland.

One of the many post-it notes left on a sidewalk around the corner from the remains of the warehouse said, “Praying for you. … Hope you’re still here.”

Firefighters had searched less than half the building and expected more casualties as they worked around the clock to remove debris bucket by bucket.

The district attorney’s sent a team to search for signs of a crime in the warehouse that was already under investigation by the city for possible code violations. The space was only permitted as a warehouse and neighbors had complained of trash piling up and people were illegally living there.

Authorities would not answer questions about the couple that operated the Satya Yuga collective, who were identified as Derick Ion Almena and Micah Allison and were believed to have been out of the building at the time of the blaze.

The couple had a troubled relationship, said Michael Allison of Portland, Oregon, the father of Micah. He and other family members persuaded his daughter to go to a drug rehabilitation center in 2015, but Almena talked his way into the clinic and convinced Micah to leave with him, Michael Allison said.

The family’s three children had lice and needed new clothes, prompting family to call child-protective services, said Michael Allison, who wept as he talked. But Almena and his partner eventually were able to win custody of the children back and cut off all communication with Michael Allison, the father said.

“Whenever I could, I would to talk to (Micah) to get away from him because I knew he was dangerous from day one,” he said. “All of that has now been proven.”

A man identified as Derick Ion posted a Facebook message early Saturday, saying, “Everything I worked so hard for is gone. Blessed that my children and Micah were at a hotel safe and sound.” He drew rebukes online from others who said he was warned the building was unsafe.

Almena did not immediately respond to emails or phone numbers associated with him. No one answered a call to a number for Micah Allison.

The building had been carved into artist studios and visitors and former denizens said it was a cluttered death trap, piled with scrap wood, a mess of snaking electric cords and only two exits.

Almena had leased the space from its owner and then rented five recreational vehicles and other nooks on the ground floor as living spaces, said Danielle Boudreaux, a former friend of Almena and Allison. They held regular concerts and dance parties, like the one Friday, to make money, Boudreaux said.

Shelley Mack was drawn there by the promise of living among artists and paying a reasonable rent in an area where the tech boom has created a housing shortage and exorbitant leases. She after a few months two years ago when the place failed to live up to its promises.

“Some people were happy to have a roof over their head even though there was no heat or no place to eat or that it was filthy and infested,” Mack said. “You just get sucked in because it seems like it’s this nice place and this artistic community and they talk a good game. There are people there that wanted to be there and believed in it. And I think I did too for a little bit. And then I afterward, I was like, um no.”