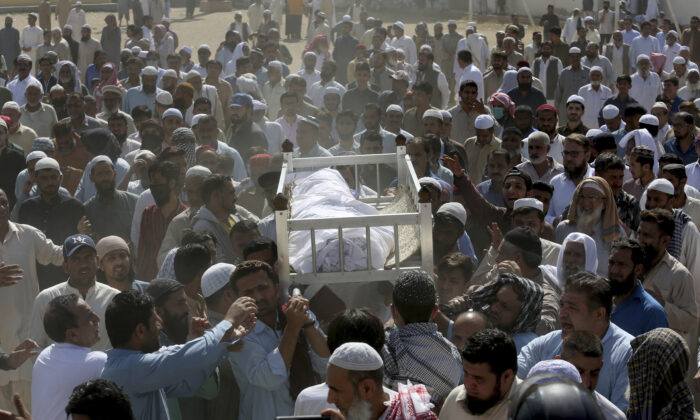 People carry the body of a victim of a toxic gas leak, during his funeral prayer, in Karachi, Pakistan, on Feb. 17, 2020. (Fareed Khan/AP Photo)
Middle East

Death Toll From Toxic Gas Leak Rises to 14 in Pakistan

The leak that started Sunday has set off a panic in Karachi and raised concerns because city officials could not immediately identify the source and type of gas involved. Officials said there was no suspicion of sabotage.

Zafar Mahdi, a senior health official, put the death toll at 14 on Tuesday.

Authorities said they were planning to evacuate residents from Kamari to safer places by Tuesday evening. Scientists and chemical experts from the army and navy were deployed to the affected area to try to detect the source of the leak.

Syed Murad Ali Shah, chief minister in Sindh province, acknowledged that authorities were still unable to determine what caused the gas leak, which he said had not spread to other parts of the city.

Hundreds of residents rallied Tuesday demanding the source of the leak be traced quickly.

All of the stricken people—hospitals said they had treated more than 650—were residents of Kamari.

A patient in a Karchi hospital, Babar Bahadur, said Monday he first felt an ache in his eyes and pain in chest.

“My heart started beating suddenly very, very fast,” he told The Associated Press. He recounted how he immediately was rushed to the hospital where he was treated and felt better “after quite some time.”

Bahadur said his son experienced some of the same symptoms and was also briefly treated at the hospital.

Port officials insisted no gas leaks occurred at any of their facilities.

Karachi is the capital of southern Sindh province, Pakistan’s largest city, and the country’s chief commercial hub. It has oil refineries nearby and a key installation of Pakistan’s navy is also located there.