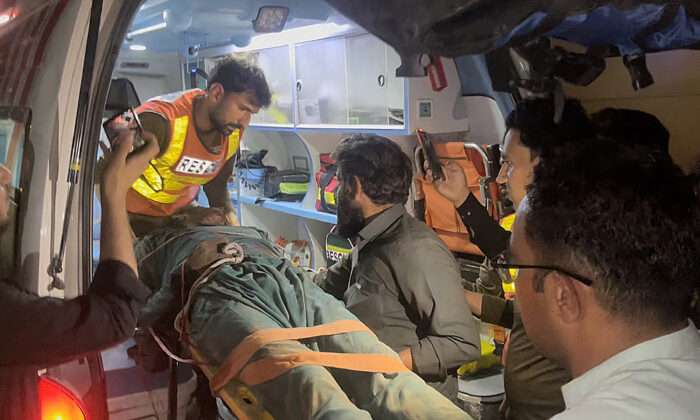 Rescue workers carry the body of a blast victim into an ambulance following an overnight bomb blast in Pakistan's northwest Swat valley on Sept. 13, 2022. (AFP via Getty Images)
Asia & Pacific

Death Toll From Overnight Bombing in Pakistan Rises to 8

PESHAWAR, Pakistan—Eight people have been killed in a roadside bombing that targeted an anti-Taliban village elder’s vehicle in northwestern Pakistan, police said.

Saeed Khan, a senior police official in Swat, said the slain head of a village peace committee, Idrees Khan, was traveling in the area when the roadside bomb hit his vehicle. He said that initial reports suggested the bombing killed five but later they concluded eight people had died, including two policemen.

In a statement, Mohammad Khurasani, the spokesman for the Pakistani Taliban terrorist group—known as Tehreek-e-Taliban Pakistan (TTP)—claimed responsibility. He said that the slain head of the peace committee had been supporting security forces for the past several years.

The Pakistani Taliban have been holding peace talks since May in Kabul, Afghanistan. But isolated attacks and security raids on terrorist hideouts have continued, raising fears these talks could break in the coming months, if not weeks.

A formal cease-fire between Pakistan and the TTP is still in place.

Islamabad has demanded that the new Taliban rulers in Afghanistan prevent terrorist groups, including TTP, from using Afghan territory for attacks inside Pakistan. Before the Taliban takeover next door, Islamabad and Kabul had often traded blame and accused each other of sheltering terrorists.