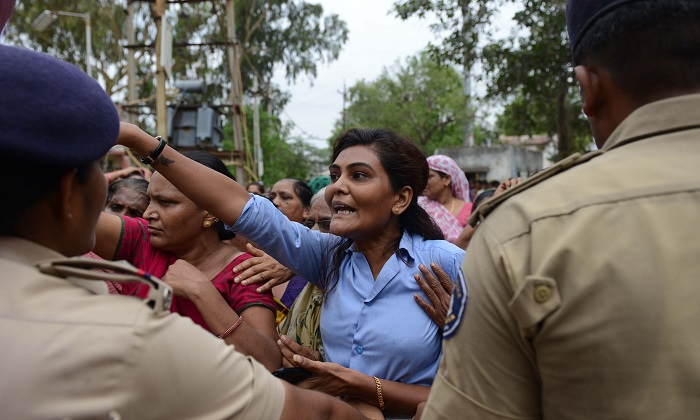 Indian Dalit protestors at Dholka town, some 40 kms from Ahmedabad on July 21, 2016. Dalits and supporters participated in a protest rally against an earlier attack on Dalit caste members by hard-line Hindus. (Sam Panthaky/AFP/Getty Images)
Asia & Pacific

Death Sentences Given for ‘Honor’ Killing in India

Death sentences have been given to six men in India for their involvment in the brutal murder of a man who married a woman from a higher Hindu caste.

Among the six people sentenced to death is the father of the dead man’s wife.

Sankar, 22, and his wife Kausalya were attacked in broad daylight with sharp weapons by a gang of men in the town of Udumalpet in the southern state of Tamil Nadu on March 13, 2016. The couple were out shopping at the time. Sankar died during the attack, while his wife managed to survive head injuries.

Remember Dalit boy Shankar who was hacked to death for marrying caste girl Gowsalya in Udumalpet, TN? Look what she has made of her life after surviving the attack & losing her husband. Her story is more inspiring than anything I have heard in a long long time. pic.twitter.com/PICSwMU6LQ

Police said Sankar, from India’s Dalit community, was murdered for marrying a woman from a higher Hindu caste, reported the BBC. Dalits were previously known as the so-called untouchables in the Hindu caste system.

The couple met two years prior to the murder while they were studying at college. Kausalya’s family opposed their relationship and she later started staying at his house. They had been married for eight months before the attack, reported the Indian Express.

The death sentences were handed down to six of the 11 accused over the murder on Tuesday Dec. 12. Another man was sentenced to life in prison while another man received five years in jail over the attack, reported the BBC.

Three others, including the bride’s mother and uncle, were acquitted.

The dead man’s wife said she would do her best to ensure that justice is enforced over the crime.

“Although my personal opinion on capital punishment is different, I believe this is a significant judgment against casteist forces,” said Kausalya according to the Indian Express.

“I will file an appeal in the higher court against the acquittals. I will continue this legal battle if the convicts appeal against the order,” she said.

“I will continue this battle till Shankar’s family gets justice.”

As Kausalya moves on with her life, here's a picture of her from two days ago playing the Parai, an instrument played largely by the Dalit community in Tamil Nadu. #JusticeForKausalya pic.twitter.com/p0geTBZeDZ