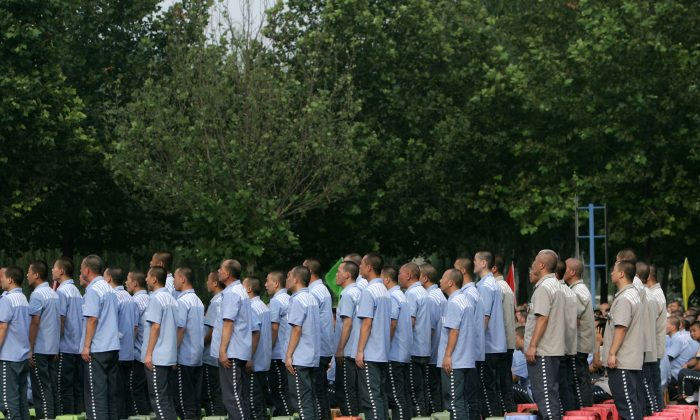 Inmates stand at the Tianhe Prison on Aug. 8, 2007 in Beijing, China. The recent reversal of two death penalty cases in Fujian Province doesn't mark any change in the legal system in China, argues Heng He. (China Photos/Getty Images)
Opinion

On Aug. 22, eight years of misery ended for Nian Bin and his family. The Higher Court of southeastern China’s Fujian Province acquitted him of all charges, vacating the death sentence that had hung over him and releasing him immediately. Some state-run media have hailed this as a sign of improvement in China’s legal system, but the real story is different.

On July 27, 2006, a family neighboring Nian and that family’s landlord suffered food poisoning after dinner. Six were sent to the hospital and two of them died, both children.

Twelve days later, the police announced that the case was solved. Nian Bin was charged with murder. Over the following eight years, Nian Bin’s case was tried, appealed, re-tried, and re-appealed many times. He was sentenced to death four times.

During his first trial, he withdrew his confession, saying that it was made under torture and threats to his wife. When he could take no more, Nian Bin tried to kill himself by biting his own tongue. The police admitted he attempted suicide but denied the torture, arguing that the suicide attempt was after the police force’s “education work.”

Early this year, a similar case, also in Fujian Province, was also reversed. Wu Changlong and four other suspects were judged innocent by the Fujian Higher Court. By then, Wu had been locked up for 13 years. It had been ten years since he was given a sentence of death with a reprieve for a crime he had never committed.

Wu was arrested on connection with an explosion at a Communist Party office. After 53 days of torture and three failed suicide attempts, Wu started to “confess” and “give up his accomplice.”

Trying to avoid to giving up his family members and relatives, Wu gave the name of his sister’s ex-boyfriend. That unlucky guy then “gave up” his former driver and another forklift driver. All five were convicted, with two receiving a death sentence with a reprieve.

The recent article “Coming Back Not Guilty” by Southern Metropolis Daily’s “Weekly In-Depth Report” listed nine cases in which convicted murderers were found not guilty by a provincial higher court or the Supreme Court. All the convictions were based on “confessions” after torture.

In most of the cases, there was strong evidence—even before or during the trials—to prove that the convicted were not the ones who committed the murders.

In 2004 the Ministry of Public Security website carried an order that all “murder cases must be solved.” The next year the number of cases “solved” increased dramatically.

Once the case is brought to court, the sentence is almost certain. In China, the police, the prosecutor, and the court are all on the same side. There is no mechanism for correcting the mistakes made by the police, or worse, rejecting the fabricated case created by the police.

Under the order that “murder cases must be solved,” the rate for solving murder cases became the most important issue for all the parties involved. Under such an order, torture is not only allowed, but encouraged.

Those cases are not necessarily politically motivated, at least not in the beginning. However, once the case is filed and tried, all the officials involved become an interest group. Their reputation, career, and financial interests are all bound to the case.

They would do anything to prevent the cases being re-investigated and redressed. That’s why the typical case can’t be reversed at the lower or even the higher court level.

Rolling on the Nail Board

Chinese netzens aren’t buying the official explanation that the two cases reversed in Fujian Province are the results of improvements in China’s legal system. Most people believe that the two cases were overturned because of the sisters of the two suspects.

Neither Nian Bin’s sister Nian Jianlan nor Wu Changlong’s sister Wu Huaying has ever stopped appealing for her brother. During 13 years of appealing, Wu Huaying was detained four times and served one year in jail.

The netzens praise these two as “sisters rolling on the nail board.” In the Qing Dynasty, people who believed that they, or their family members, were wrongfully convicted could directly appeal to higher authorities, even the emperor himself.

However, the petitioners had to prove that the grievances were so huge that they were willing to suffer enormous pain to seek justice. In a famous real story the sister of a wrongfully accused suspect rolled on a wooden board full of nails with the points up. After a reinvestigation, the brother was finally cleared of all charges.

The current situation is worse than that during the Qing Dynasty. New regulations make petition to higher authorities impossible. The authorities don’t care if someone rolls on a nail board or, as petitioners in China sometimes do, burns himself to death.

Nian Jianlan didn’t petition for her brother as others do. She said that most petitioners just “exchanged their miserable stories.” “There is no hope, only negative emotions” among the petitioners, she said. She accepted her lawyer’s suggestion, kept returning to the courts, and finally succeeded.

The newspaper Beijing Youth published an article titled “Nian Bin’s Sister’s Way to Appeal Can be Copied.” Actually, Nian Bin’s case is not a model most others can easily follow.

Nian Bin had a sister who was willing to sacrifice herself for him. Nian Jianlian was still young and could take the pressure, both mentally and physically. She taught herself the law. She learned to collect the evidence to prove Nian Bin’s innocence.

They also had a strong legal team. Zhang Yansheng, their first lawyer, was deeply involved. She first charged 100 thousand Yuan, then reduced her fee to 50 thousand, then reduced it to no charge at all. She even paid other lawyers to travel to Fujian to help with the case.

The case drew national attention and the legal professionals even held a forum to discuss the case in Beijing. How many cases can meet such requirements?

The idea that Nian Bin’s case can be imitated has another bigger problem. Many similar discussions, focusing on the victims of the legal system, have tried to “educate” them to depend on the system that created their sufferings and injustice.

At the same time, the fact is ignored that the system—the police—fabricated the case against innocent people in the first place. The police, prosecutors, and judges have all the resources and authority, while the victims live at the bottom of society with little or no education.

Asking the victims to find the evidence proving their innocence is unreasonable and unfair.

Wu Huaying, the sister of the suspect in the other Fujian case, never thought the acquittal was a victory. Even though Wu Changlong and other victims of the wrongful death sentence received compensation from the state, it’s hard to say their sufferings could be compensated. It is even harder to say that justice is done.

In the famous case from the Qing Dynasty, at least 30 officials were punished by demotion, removal from their position, or exile. But we have never heard of a single official punished who was involved in the current cases that were reversed.

The police and other officials who applied torture, extracted confessions, fabricated evidence, and manipulated witnesses are still around, enjoying the power that partially came from the fake cases they “solved.” The system that made possible the fabricated cases has not been touched.

Reversing these criminal cases is only a fine adjustment of policy, not the establishment of the rule of law. For the new leadership, reversing a few famous cases is a way to win the support of ordinary people without really changing of the system. In the meantime, the legal system’s suppression and harassment of dissidents, human rights activists, rights lawyers, and religious believers is increasing.