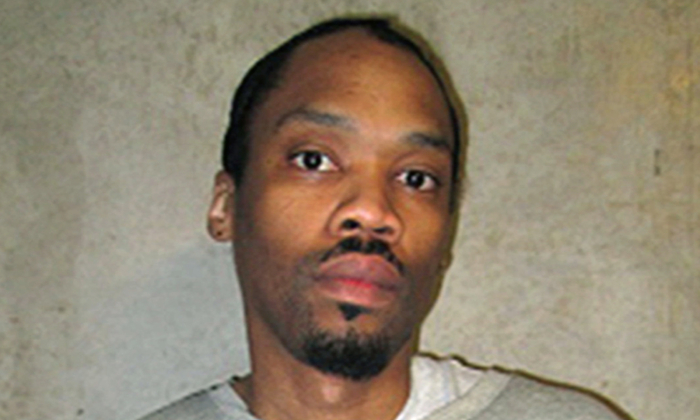 Julius Jones is seen in a Feb. 5, 2018, file photograph. (Oklahoma Department of Corrections via AP)
Crime and Incidents

Oklahoma Gov. Kevin Stitt on Thursday commuted the death sentence of Julius Jones, a death row inmate, just hours before he was scheduled to die.

The Republican governor intervened less than four hours before 41-year-old Jones was scheduled to be executed by lethal injection at the Oklahoma State Penitentiary in McAlester.

“After prayerful consideration and reviewing materials presented by all sides of this case, I have determined to commute Julius Jones’ sentence to life imprisonment without the possibility of parole,” the governor said in a statement.

Stitt issued an executive order (pdf) doing so, on the condition that Jones shall never again be eligible to apply for commutation, pardon, or parole.

A crowd of Jones’s supporters broke out into loud applause and cheers at the Oklahoma Capitol when the decision was announced just after noon. Meanwhile, more than 100 supporters who had gathered outside the prison in McAlester erupted in cheers.

Jones was sentenced to death in 2002 for the 1999 shooting death of Paul Howell, an insurance executive, during a carjacking.

Jones said he was framed by the actual killer, a high school friend and co-defendant who was a key witness against him. He and his family maintain he was at home the night of Howell’s murder, eating dinner and playing games with his siblings, and that the jury never heard this information at trial.

Information from trial transcripts shows that witnesses identified Jones as the shooter and placed him with Howell’s stolen vehicle. Specifically, Howell’s sister, Megan Tobey, testified before the state’s Pardon and Parole Board that she saw Jones shoot her brother in his parents’ driveway in the Oklahoma City suburb of Edmond.

“We know Governor Stitt had a difficult decision to make,” the Howell family said Thursday in a statement. “We take comfort that his decision affirmed the guilt of Julius Jones and that he shall not be eligible to apply for, or be considered for, a commutation, pardon, or parole for the remainder of his life.”

Jones’s case gained prominence after a three-part documentary series “The Last Defense” in 2018 highlighted his claim of innocence, and drew the attention of numerous sports figures, such as NBA stars Russell Westbrook, Blake Griffin, and Trae Young, and NFL quarterback Baker Mayfield, who all urged Stitt to commute Jones’s death sentence.

A DNA test initiated by Jones’s defense team the same year further linked him to the 1999 murder. Investigators found the murder weapon wrapped in a bandanna with Jones’s DNA in an attic space above his bedroom. But Jones claimed in his commutation filing that the gun and bandanna were planted there by the actual killer, who visited Jones’s house after the killing.

“We are greatly disappointed that after 22 years, four appeals, including the review of 13 appellate Judges, the work of the investigators, prosecutors, jurors, and the trial Judge have been set aside,” O’Connor said.

“We thank Governor Stitt for granting clemency for Julius Jones,” Minor said in an emailed statement. “However, this does not negate the fact that the death penalty is a failed policy marked by grievous errors. Along with the botched executions, we cannot forget that more than 185 people have been freed from death rows due to wrongful convictions. As conservatives, we will continue to fight this costly, unchecked government power that is shrouded in secrecy.”

Reality television star Kim Kardashian West had also urged Stitt to commute Jones’s sentence. On Thursday, she thanked Stitt and the state parole board, saying on Twitter, “I’m so grateful to everyone who used their voice and helped to save Julius’s life today.”

In October, Oklahoma carried out the first execution in the state in six years to a death row inmate, after a moratorium on executions due to concerns over its lethal injection methods.