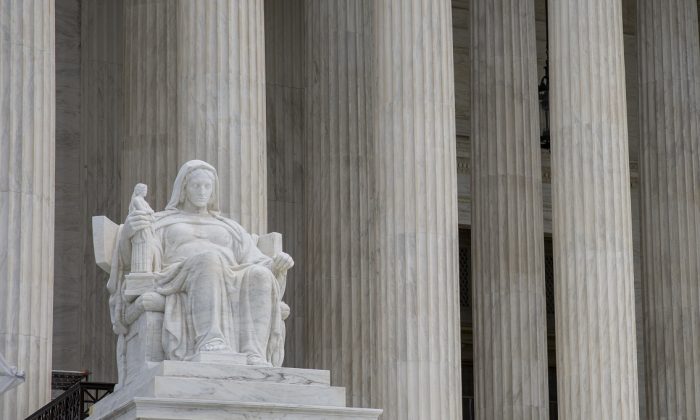 The unusual request of a condemned man with a rare and painful medical condition to be gassed to death with nitrogen, instead of being injected with lethal drugs, is an obvious ploy to delay his execution indefinitely, Missouri’s State Solicitor D. John Sauer told the Supreme Court on Nov. 6.

As oral arguments were presented in that case, elsewhere, attorneys for four death-row inmates in Tennessee filed suit, asking a federal judge to allow them to select death by firing squad as an alternative to lethal injection or the electric chair, their state’s legally mandated methods of execution, the Tennessean reports.

The Tennessee men argue the state’s three-drug cocktail used in executions can cause the condemned person to experience suffocation, internal chemical burns, and paralysis before he succumbs. Likewise, the electric chair “is sure or very likely to inflict a gruesome and torturous death.”

The case before the Supreme Court was brought by Missouri inmate Russell Bucklew, 50, on appeal from the St. Louis-based U.S. Court of Appeals for the Eighth Circuit. In 1998, Bucklew was sentenced to die after being convicted of “first-degree murder, kidnapping, burglary, forcible rape, and armed criminal conduct,” according to a summary provided by the Supreme Court.

Bucklew says that he suffers from cavernous hemangioma, a very rare, progressive, incurable condition in which inoperable blood-engorged tumors grow within his throat and around his face, head, and neck. The tumors are sensitive to touch and can rupture and tear. Minor friction can cause them to bleed. He has a tumor around his uvula at the back of his mouth that causes him to choke, bleed, and have difficulty breathing.

Lying face-up on a gurney, as he would presumably have to do during the lethal-injection process, aggravates these problems. Bucklew also has compromised veins in his hands and arms that he maintains couldn’t be used efficaciously for lethal injection, so the lethal-injection process itself would cause him intense, unnecessary pain. Therefore, Bucklew argues, it is prohibited by the Eighth Amendment’s ban on cruel and unusual punishment.

Bucklew’s attorney, Robert Hochman, urged the Supreme Court to direct the district court to reconsider the case, in light of his client’s medical problems and the pain he would experience under Missouri’s current lethal-injection process.

“If you vacate and remand, then we can go back, we cannot only look into the question of what’s—how the comparison in light of any new circumstances would be to the lethal—unknown aspects of lethal gas, but we can also figure out whether there are other ways to modify a lethal-injection protocol that alleviate this grave concern,” Hochman said.

Speaking for Missouri, Sauer denied that the so-called Show Me State’s lethal-injection process was constitutionally suspect.

“Missouri’s single-drug protocol using pentobarbital is the most humane and effective method of execution that is currently known,” Sauer said. “Missouri has used it 20 times without any significant incident.”

“The State of Missouri has a compelling interest in seeing this just and lawful sentence is carried out as quickly as possible,” he said. “A remand for further fact-finding, which is the principal request of the petitioner here, would interject yet more delay before the execution of a sentence that’s been in place for 22 years now.”

Bucklew’s request to be executed using nitrogen is novel and risky, he said.

“Nitrogen hypoxia has never been tried by any state. At this time, no protocol exists for execution by nitrogen hypoxia. No state has ever tried it.”

The high court previously found when there is “an alternative method of execution that is untried and untested, that no state has ever used, that no study supports showing its efficacy, [it] is not an alternative that’s reasonable.”

Referring to the claim that lethal injection will cause Bucklew to suffer needlessly while being executed, Justice Brett Kavanaugh asked Sauer, “Are you saying even if the method creates gruesome and brutal pain, you can still do it because there’s no alternative?”

Sauer affirmed he was saying precisely that and Kavanaugh offered a follow-up question: “Is there any limit on that?”

“I think there—the limit would occur if the method of execution were viewed as superadding terror, pain, or disgrace within the meaning of the court’s earlier method of execution cases,” Sauer said. The Supreme Court has held that “to eliminate the risk of pain completely is impossible.”

But Bucklew isn’t acting in good faith, he suggested.

The inmate is working the system to stay alive, he suggested.

“And now, 14 days before his first scheduled execution, for the very first time, he comes forward with an as-applied challenge that is based on a medical condition that he has had since birth,” Sauer said.