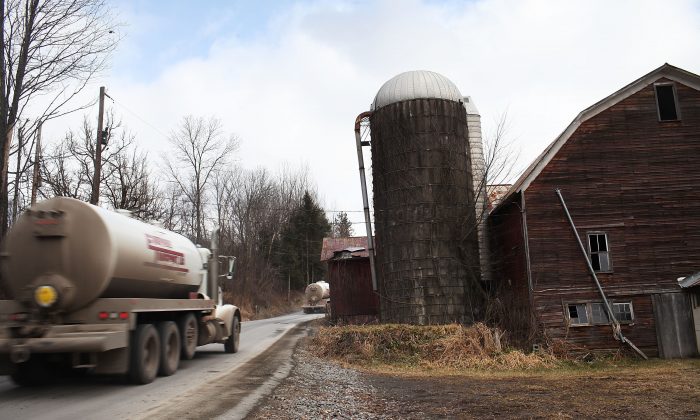 A truck with the natural gas industry drives through the countryside to a hydraulic fracturing site in Springville, Pa., Jan. 18, 2012. (Spencer Platt/Getty Images)
Opinion

Death of the Sweet Waters

How hazardous might that spill be to human health, fish, and river ecology over the long term? No one knows. The dangers of MCHM, a little-known chemical used to wash coal, have never been properly researched. But even after residents were given the go-ahead to drink the water, calls to poison control doubled and emergency room visits tripled.

Numerous toxic spills into other waterways across the nation have raised similar concerns. Last fall’s devastating floods, for example, swept oil, industrial chemicals, and sewage into Colorado rivers, with no one knowing the long-range health implications.

When such catastrophes strike, we become intensely aware for a news cycle or two that we can’t survive without clean water. But hidden from view are the daily assaults on our precious water supply and on the regulations that make it drinkable.

Take drugs, for example. A 2008 Associated Press investigation found that drinking water in at least 24 metropolitan areas was tainted by pharmaceuticals. That means at least 41 million Americans may be drinking water containing traces of mood stabilizers, epilepsy drugs, antibiotics, and more. A 2013 study found that Minnesota lakes carry prescription drugs, DEET (an insect repellant), BPA (a plasticizer), and cocaine.

A major source of drugs in drinking water is industrial farms that feed livestock copious amounts of hormones, steroids, and antibiotics. The medicine-laden manure from millions of animals, spread thickly on crop fields, runs off into waterways with the rain.

Agricultural runoff is the largest source of freshwater pollution, according to the Environmental Protection Agency (EPA). Untreated animal waste can harbor heavy metals, E. coli, and other pathogens. A 2009 study found that waterborne parasites, viruses, or bacteria from human and animal waste cause nearly 20 million illnesses a year.

While these freshwater threats have seen some investigation, other hazards present greater unknowns. Take nanoparticles, used in 1,628 consumer products ranging from sunscreen to surgical dressings and baby wipes. How will they impact public health as they leech into waterways? We have no idea—but we do know that nanoparticles easily enter cells, tissues, and organs that larger particles cannot.

How do the dozens of chemicals used in fracking for natural gas and oil move through groundwater? And how can scientists advise on safety when regulators still allow companies to keep the contents of these chemical cocktails secret?

Are toxic chemicals being more dangerously concentrated in the shrinking waters of the drought-stricken West?

What doesn’t get filtered out by our water treatment plants? Radioactivity? Heavy metals? Industrial chemicals? Pesticides?

And the big questions: What research isn’t being done to ensure a safe public water supply? What’s barring that research? Funding? Corporate influence? And why isn’t the EPA an effective watchdog—practicing the precautionary principle, like its counterpart, the European Environment Agency?

About 40 percent of the U.S. public water supply currently fails to meet the standards of the Safe Drinking Water Act at least once annually—and less than 3 percent of Clean Water Act violations result in penalties.

One reason is archaic laws. The 1976 Toxic Substances Control Act needs immediate revision. TCSA “grandfathered” in 60,000 chemicals—most in use today—which have never been adequately tested for safety, if at all. MCHM is on that list.

Another problem is new laws. In 2001, the Supreme Court ruled that the EPA has jurisdiction only over “navigable” waters—denying wetlands and small waterways Clean Water Act protection from pollution. About 117 million Americans get their drinking water from these now-exempted water sources.

The Clean Water Act is broken. It’s up to Congress to pass the Clean Water Restoration Act to reinstate long-standing protections. Congress should also update chemical safety laws to safeguard us from cancers, birth defects, and reproductive, developmental, and neurological problems. And it’s time that EPA did its job policing fresh water.

Water is our most precious resource. Protecting it requires eternal vigilance—especially in our fast-changing, chemically and technologically complex world.